When I was a teenager, starting to play Magic, Tempest was still widely available. Urza’s Destiny was the latest set and the Sixth Edition rules had just shaken up the game (although I didn’t know that, since I’ve only learned those rules). When I came to the LGS, I was always looking and interessted in the older sets and boosters. Ice Age, Homelands, Visions. But the oldest set available was Fallen Empires (FE). Now when I heard old, I immediately saw pictures of Moxen, Lotus and Library of Alexandria. So, not knowing enough, I bought a pack of Fallen Empires. I have no idea what was in there, but I know the cards went straight into my box of not-playable bulk stuff.

And that was that. I bought a playset of Hymn to Tourach and never looked back at FE again.

Then, some 18 years later, I started playing Old School. Here in the Netherlands, most tournaments are using the Swedish Rules, but since I’ve been playing online as well, EC and Atlantic caused me to revist the FE set. I did a quick scan of the cards, choose some cards that seemed fun, got the playsets and every now and then build an EC or Atlantic deck with them.

Then the idea of the Magic Reborn League came along, and we’re going to open old Starter Packs and Boosters! This means that we were also going to open some FE (actually, we’re doing a 25th anniversary ReLaunch party). But there’s no spoilerseason or Limited Set Review to learn all the ins and outs of this set.

So where to begin?
When I was at Joep’s place a few weeks ago, he gave me a FE booster to open (many thanks for that!), so I got my first glance at what will be coming.

Erm, ok… So I know Hymn and Order…

Thallid, Goblins, Orcs, Dwarves, Homarids. I’ve seen those tribes come by from time to time (well maybe Homarids not so much…). So it appears FE is a Tribal set. Creatures matter! Which is a good thing for Limited, I think. But since I have no idea what the tribes do, I am going to have to look further for an idea of how this set works, what the good commons are and what colors might stand out. Usualy I open Gatherer and browse all the cards, but I wanted more info on the set as a whole, so i decided to do things the Old School way and got my Magic Official Encyclopedia to have a full visual spoiler and some background story! 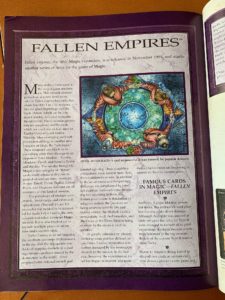 It turns out that after the Brother’s War, one continent of Dominaria has fallen into multiple civil wars. The Ice Age is coming (how fitting) and the different tribes are all battling for power. Merfolk and Homarids; Dwarves vs Orcs vs Goblins; The black order of knights vs their own created slave race of Thrulls. You name it! Looks to me that this might actually be something way cooler than I expected. I still have no idea what the cards do, and luckily I have until november to find out. There’s so much to explore! The flavor seems awesome. The fact that some cards have different versions of art makes it hard to know which card is which, but I will have to dive into that. Step one will be exploring all the cards. Step two will be checking the commons an step three will be looking into the different archetypes.

5 thoughts on “My second first glance at Fallen Empires”