When I started playing MtG in the summer of 1995 there was a bi-weekly gathering in Haarlem called “Magic Day” and somewhere probably early 1996 I played my first tournament. I still own the DCI Number I got there! 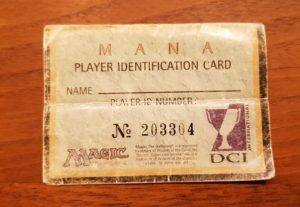 After playing that very first tournament I attended as much “Magic Day’s” as I could. Most of the time there were about 30/40 players and they would rotate the different formats. I remember attending my first somewhat bigger tournament in Haarlem where I beat the #1 Dutch Type 1 player at that moment with a deck which came straight out of the Inquest magazine called: “Lean Mean Green Machine” the memories! I also vaguely remember attending a huge tournament in Amsterdam and after searching on Google the only thing I found is that it might have been the very first Grand Prix outside the USA in March 1997. All these tournaments left a huge impression but I was to young at that moment to really grasp it. Nowadays there are plenty of big Magic tournaments to attend but those days, a Magic tournament was something special by itself.

Al I wanted to do was to host my own tournament and I tinkered about it forever and ever. Where should it be? How would I organise it? What should you be able to win? I knew I wanted something big, something memorable. By that time I had a pretty proper deck myself as well, owning some power, playing almost exclusively Type 1 tournaments. So it had to be Type 1 for sure and I was dreaming for a Mox as the prize for the winner! Back then, most people hardly every saw a mox and they where very hard to come by, this would draw everybody to the tournament right? I pondered and tinkered, sometimes forgot about it for a couple of weeks but it kept lingering in my head forever. I was young, insecure and didn’t really know where to start so nothing really ever happened and because Type 1 was a dying format by 1998, I had missed the opportunity to host the most memorable tournament ever…..

Flash forward to the summer of 2017. I got into (Old School) MtG again and learned about The Gathering of the Knights of Thorn, at that moment the only real Old School Tournament in the Netherlands. The next one was in December and this was the ultimate goal to have my first deck ready. A great location, great bunch of people and there wasn’t anything to win, appearently this wasn’t what Old School was about while I was playing with cards worth a shitload of money? People had already told me up front but it did suprise me a little. Winning a cheap signed card by other players? I hate signed cards, why would you want to win such a thing? Sure we are not all “Spike” players but I’m 75% Spike and 25% Timmy (for more information check out: https://magic.wizards.com/en/articles/archive/making-magic/timmy-johnny-and-spike-2013-12-03) and while I sometimes get (over) creative, I do always play to win.

After GoTKoT I knew 2 things. The Dutch Old School community is great and we need more Old School tournaments. Damn, 22 years later I was thinking about hosting my own tournament again and I had only just started playing. That Mox as 1st prize had become very pricy but there are plenty alternatives for that. Some months passed and a new tournament was announced, the Hill Giant Cup, Great! I learned another group of players were playing BoM rules at the Draconian Cylix Series and most recently the people from Magic Groningen announced to organise the “Paladins of the North Cup”. More tournaments wasn’t the problem anymore but I couldn’t let go setting up something myself as well.

My hometown Zandvoort seemed like a fine option, Haarlem is a city closeby as well but Amsterdam is a bit more central (also for foreign players) and suprisingly there are no Old School Tournaments hosted in Amsterdam (yet). At the Frost Giant Cup (the winter edition of the Hill Giant Cup), I learned that Jimmy somewhat had the same idea and we agreed to get together and try to organise a tournament. At GoTKoT V in December we chatted for about 30 minutes and knew for sure, this is going to happen.

It was a year after my first tournament and my mindset had changed drastically over time. I still don’t like signed cards but the idea to win a throphy which you put in your side-board the next time is great. Not winning any (big) prizes feels fine, sure winning something is always great but why should others who just want to enjoy the game, pay for that? Winning some fun cards for having a creative deck feels good, handing out some random prizes is as good as giving them to the winner and a new tournament series was born!

The name was the hardest part actually. After brainstorming with some friends, Amstergeddon was by far the best name. But unfortunatelly Viennageddon was already taken and when Jimmy pointed out that an Armageddon isn’t a cheap card which you get signed by all players, we looked for a better mascotte for our tournament. After going over the full list of Old School cards probably 8 times, Jimmy suggested Raging Bull and after reading the flavor text (“Sometimes the bulls win, and sometimes the bears win. But the bulls have more fun.”) I was convinced. An introduction by Evert in “Spelletjes Cafe 2 Klaveren” for the location followed and after picking the date, the tournament could be announced after 23 years of pondering!

I really can’t wait to see how it turns out. I’m happy if we can just gather a bunch of players who enjoy playing Magic for a day but with already 20 players signed up within a week and plenty of interest it seems like we already have a great basis for a great day! If you want to get more information or sign-up, check out this link: 1st Raging Bull Series: Spring Edition 2019

Hope to see you there!