In this article series I will explore niche archetypes in the Old School cardpool. I will primarily focus on the Swedish B&R. Most of these archetypes see only little play, due to a variety of reasons; monetary, complicated rules or fringe applications.

This time the niche archetype is focused on an underplayed card: Chains of Mephistopheles (CoM). This Legends enchantment has an unique ability. The text on the card itself is quite elaborate, but someone was very kind and made this flowchart:

As you can see, it manipulates drawing of cards. To put it simple, the first card you draw in your drawstep is “normal”. After that, your either discard a card first and if you can’t, you mill yourself.
On its own, it can be a house against decks that want to play the card advantage game. Sylvan Library, Jayemdae Tome, Library of Alexandria, but also the blue cards like Ancestral Recall and Braingeyser have a serious drawback with CoM in play. They can still give you a card, but you have to discard one first. And if you can’t, they just mill you.

Since CoM only costs 1B, it can come down early enough to be problematic for such decks and is easily splash able in most decks. At first glance, a deck like mono Black (such as Roy Neijland’s well performing n00bcon deck, shown below) can make good use of its ability. 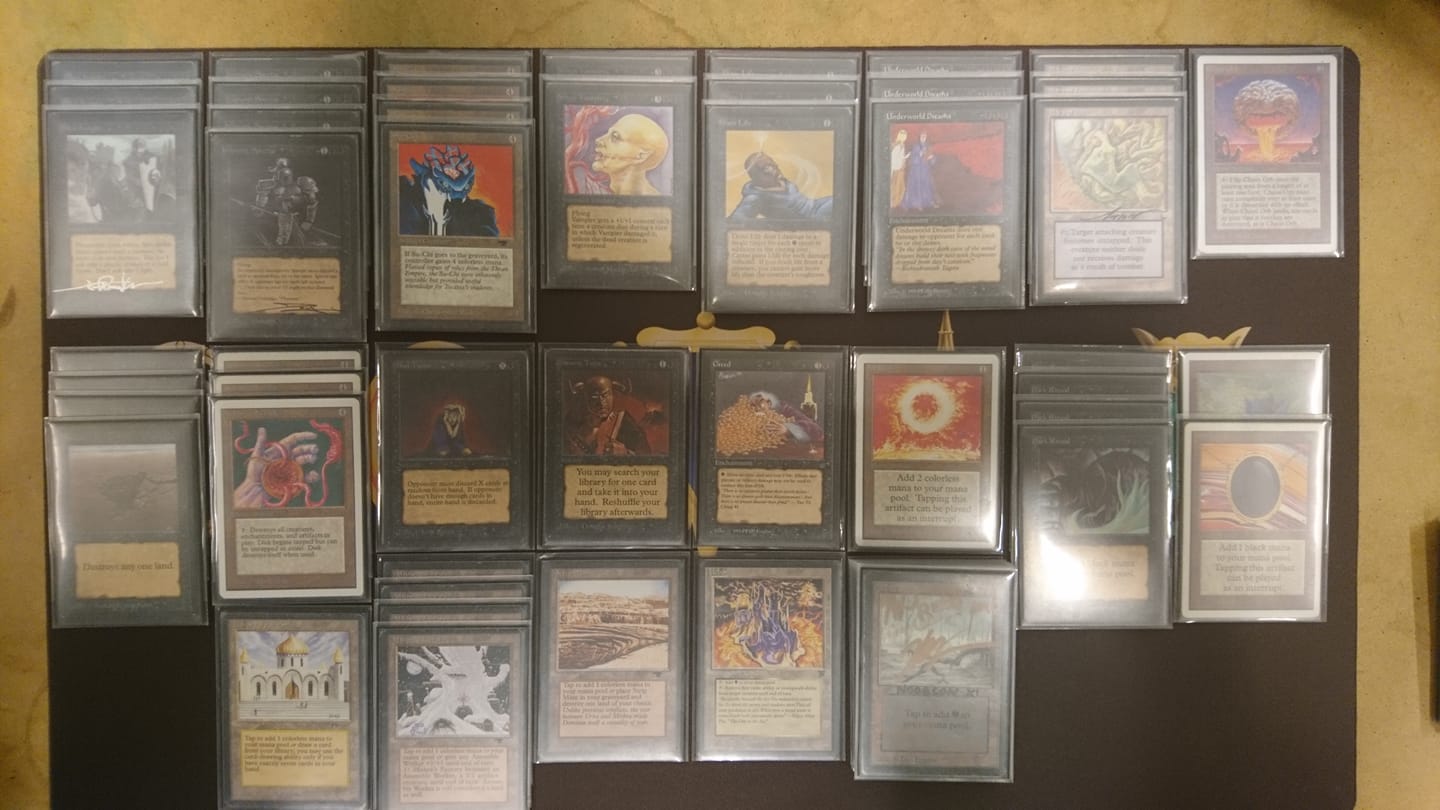 It can be mainboard or sideboard, depending on the metagame you are expecting. In mono Black however, CoM will always have to compete with Underworld Dreams. Both restrict card advantage engines. They can be used together, but since spots are always limited, you don’t see this very often.

What if we were to redesign mono Black in such a way that it uses both cards? Since both are enchantments and thus hard to get rid of in Old School, a good choice would be to give our Disenchant playing opponent too many choices for their 4-off maindeck card. Something like this perhaps: 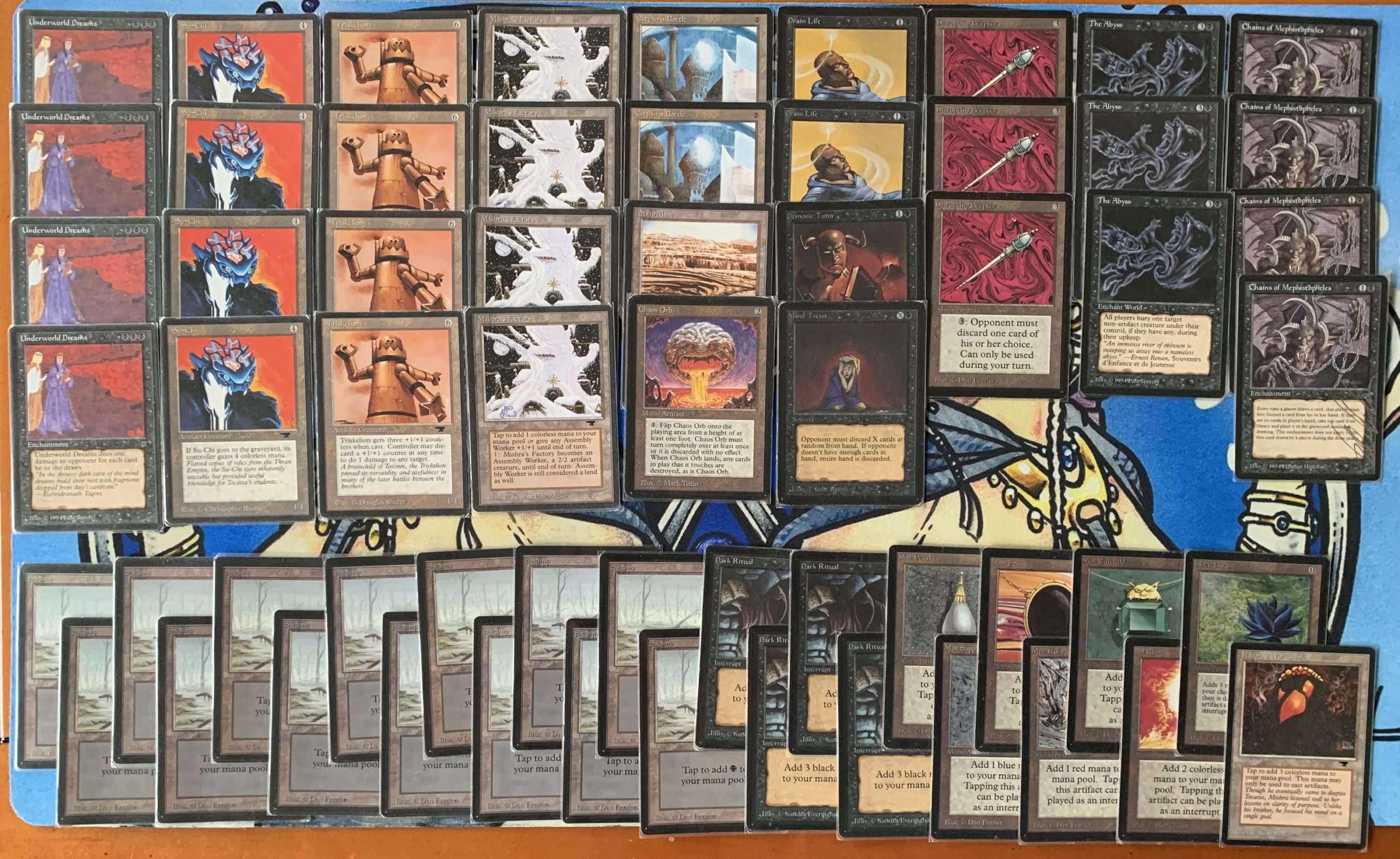 The Abyss, CoM and Underworld Dreams are all very strong and annoying cards. Triskelion and Su-Chi are both powerhouses. City in a Bottle in the maindeck can be a blowout against some strategies and the Disrupting Scepter pairs so well with CoM. Since you are in topdeckmodus, the Scepter forces you to play your cards, or lose them one by one. You could also make room in this deck to add White or Red for some early-game removal.

These examples focus more on the “you can’t draw more than one card, or else” part of CoM. But what if we explore and try to exploit the “or else” part. Enter another Legends card: 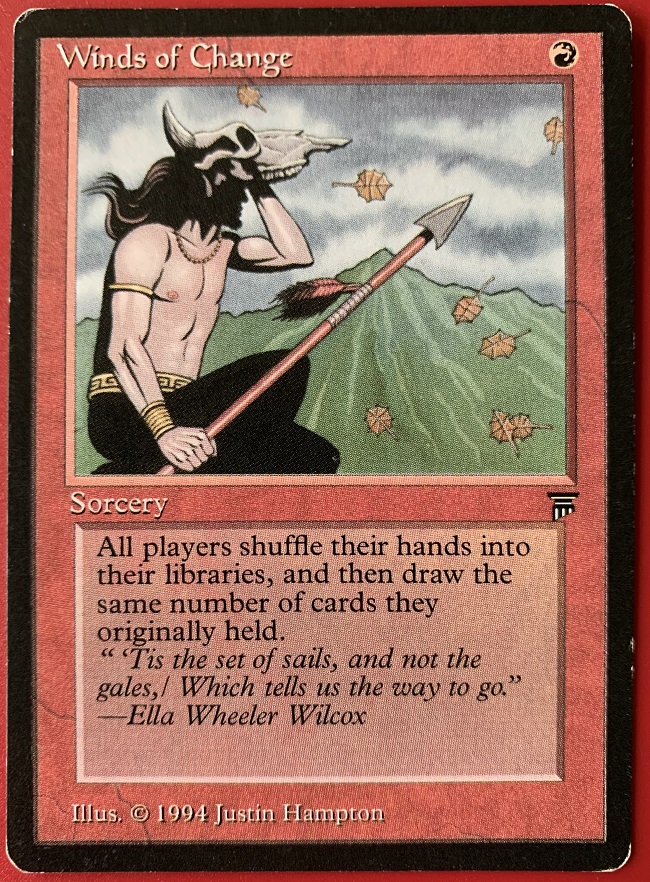 The interaction between CoM and Winds of Change (WoC) is beautiful. First you both shuffle your hands into your library. Then, since you have no cards in hand, you put the same number of cards you shuffled back from the top of your library into your graveyard. So it’s a 1 mana Mind Twist for both players, with a build in millstone effect. Another red card that works well is Wheel of Fortune. With a CoM in play it reads “Each player discards their hand and then puts the top seven cards of their library into their graveyard.”

If you can keep your opponent’s hand empty, you can use The Rack as a win condition. Disrupting Scepter or Hypnotic Specter will force your opponent to immediately play their cards, or lose them in your turn, making The Rack deal 3 damage each turn. In this deck I chose Specter over Scepter, because I think The Rack on its own is not a fast enough wincon. Sedge Troll and Hypnotic Specter are there to speed up the clock. From the sideboard, Juzam Djinn and Lightning Bolt can be brought in to speed things up even more. 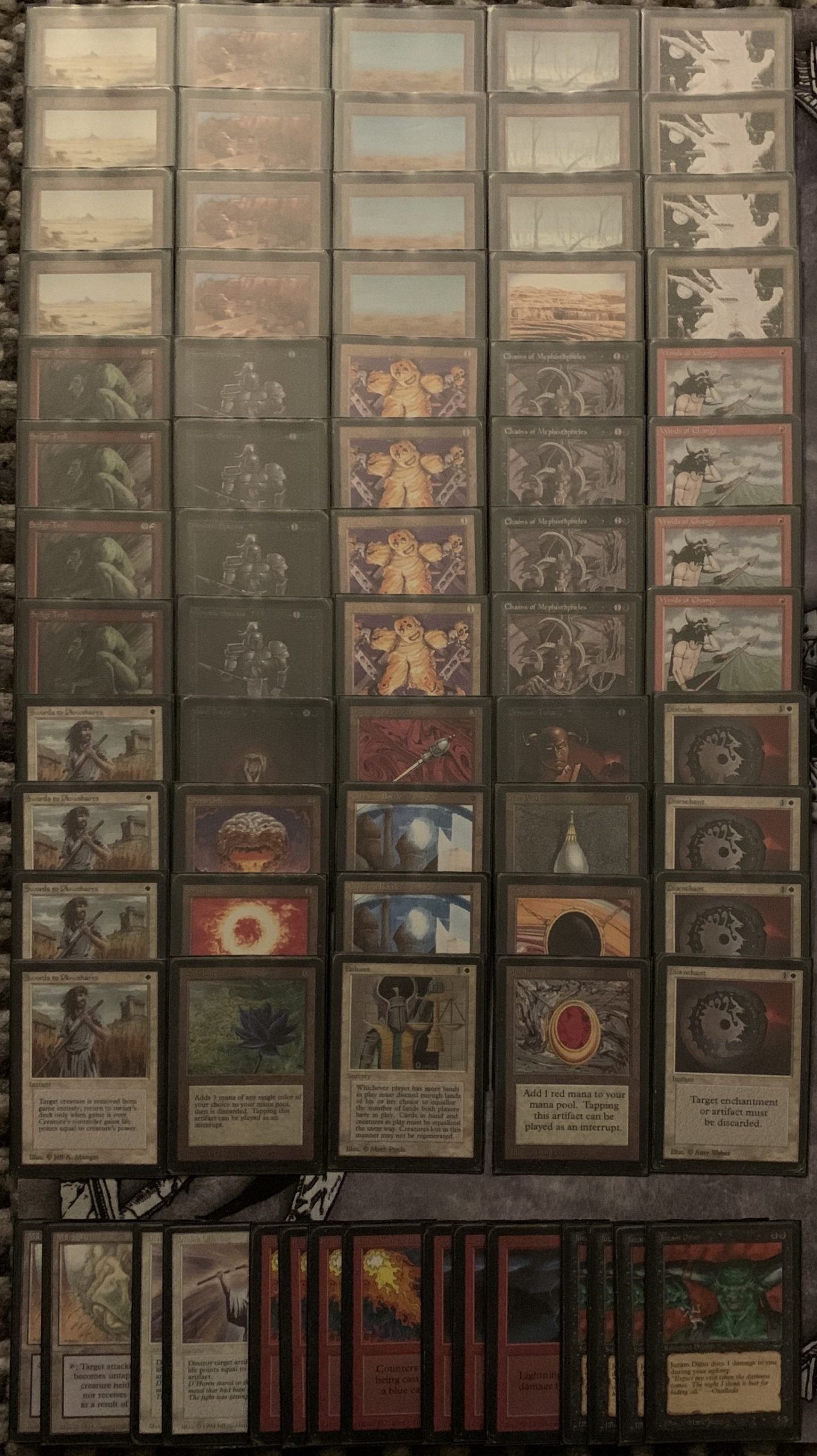 Let’s explore one last aspect of CoM a little further, the part where you have to mill yourself if you don’t have any cards in hand. Things will get very complicated, so bear with me on this next combodeck: 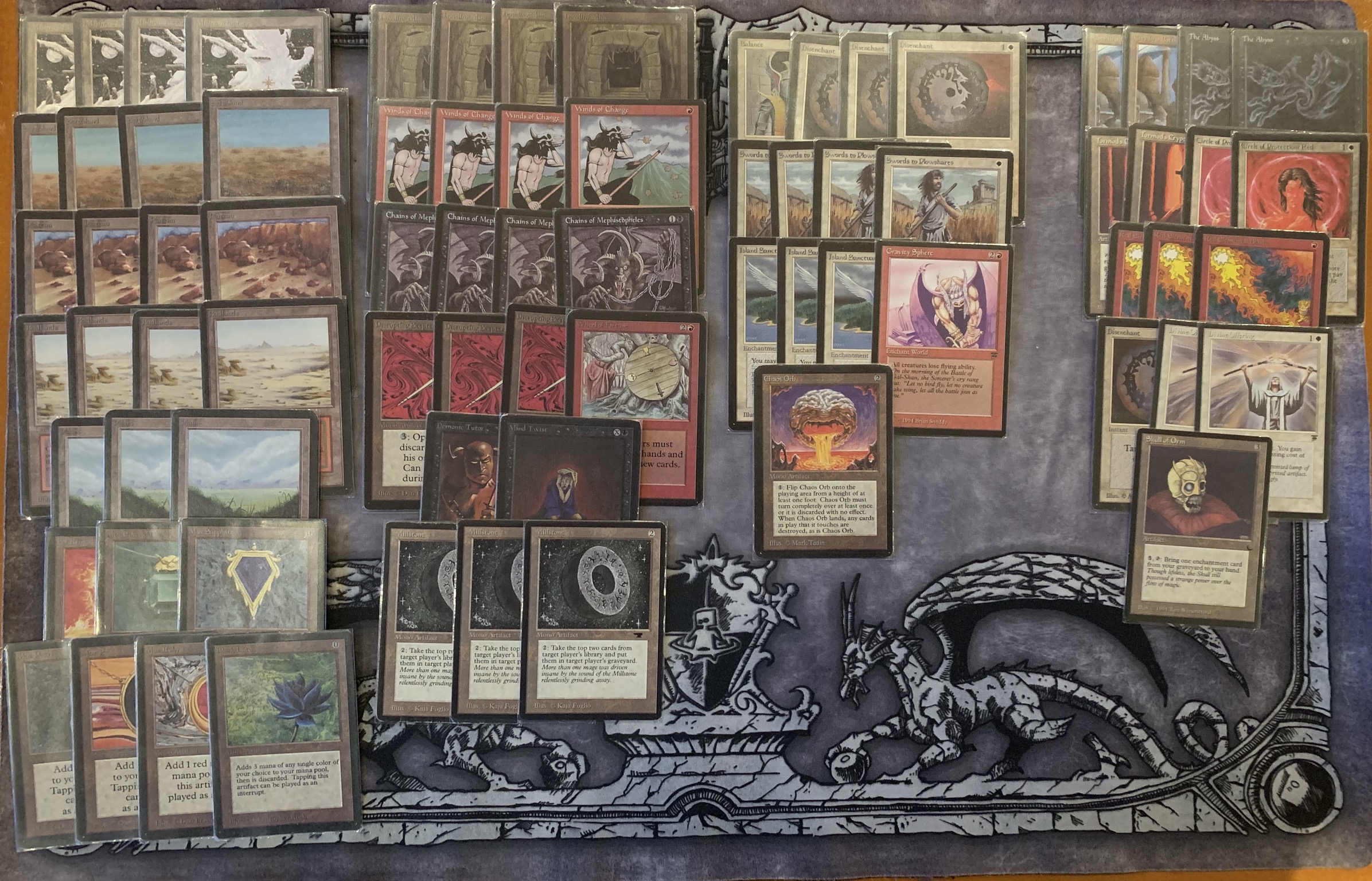 That’s right, a millstone deck! The basic principle of the deck is the same as the last deck. WoC and CoM combined empty both players hands. Howling Mine makes each player draw an extra card, so in a drawstep, a player first draws a card. Then Howling Mine makes the player draw another card, but CoM makes him/her discard a card first. Effectively you mill 1 and then draw your card for the turn.

To be able to make your opponent mill more than you, Island Sanctuary can be activated instead of drawing a card. And this can be done any number of times, for each Howling Mine. So now you can’t be attacked except by flyers and Islandwalkers, you just draw a card per turn and you can use your mana to activate Disrupting Scepter if they still have a card in hand, or just Millstone them a bunch each turn. To make the lock complete, I’ve added one copy of Gravity Sphere. Now only Islandwalking creatures can attack you.
This deck really abuses all the different things Chains of Mephistopheles does.

For just 1B, this Legends enchantment is a beautiful card, which is good on its own, but can also be used to build an entire deck around to make the effects it produces really work for you and against your opponents!