Among non-Old Schoolers the ‘Millionaires-Only’ must be the most common misconception I ran into ever since I got in touch with the flourishing Dutch Old School (OS) scene 8 months ago. And to some extent that’s very understandable. Because let’s be honest: duals and Power Nine are quite the opposite from cheap. But who said that you need Power Nine to play Old School Magic? Yes, yes of course it cannot be denied that it is fun to play with the most powered cards in MtG. What beats the feeling of coming back from a seemingly losing position by casting a blue power card? Well, how about beating the ‘smug’ powered guy with your weird brew which consist mainly of cheap commons?  Hell, maybe that’s even more fun! 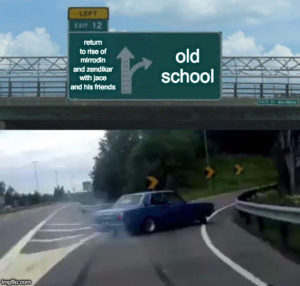 But before we deep dive into how to do that, I have a confession to make. There’s an agenda: I want to convert as many people as I can into playing Old School magic. And the reason is very simple. I want to share what I have been experiencing the past 8 months. A rediscovery of the Magic feeling so many of us had back in the 90’s when we first started playing Magic. The pre-internet days of Magic when the scene was spontaneous and fun. Where decks were weird, unexpected and unpredictable. Where trading was a big part of the fun, where Alpha cards were illegal and thus worthless, when we were just college kids or students scraping together some money to buy a booster and where the 16+ amongst us drank a lot of beer.

Of course the current Old School scene is different in many ways. But I guess what I’m trying to say is: meeting fellow-‘nerds’ who enjoy cards and beer is one of the best things you can do. It’s all about the spirit of having fun while playing the best card-game in the world.

Truth is that amongst my friends I haven’t been very successful so far with the ‘converting’ part. So I came up with a cunning plan: I’m organising a three days Old School MtG festival in my hometown Leeuwarden. I will just show it to them. At the Uthden Troll Cup, my Old School MtG Festival,  it will be all about opening boosters and building a weird brew that beats the hell out your opponents. Yes, I’m talking about playing sealed or draft with 90’s boosters. High budget draft but of course also low budget drafts. And of course we will play a 93/94 Swedish constructed as well fighting for a Uthden Troll signed by all tournament players. Oi, oi, oi, me smell a thing is near... for more info u gotta click here 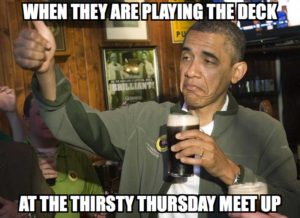 If you built a budget or creative deck, you will be rewarded. Not only because of the unparalleled feeling of beating some ‘smug’ Powered guy. Also because we give prizes for  most creative and best performing budget decks.

Now, don’t tell me it cannot be done. It has been done before. Unpowered mono black has made quite some results the past years. Mono green, merfolk blue and many more also make it to top 8 occasionally.

But maybe you just need a little help in building your budget deck? Well, I sure like to help you a little bit with that. My next (weekly) blogs will be dedicated to the art of building budget decks that beat the hell out of powered decks. Let’s crumble those suckers! 😉

2 thoughts on “Old School Magic is a game for bankers, lawyers and other millionaires, right?”