Every battle is won before it is fought

In last weeks blog I wrote about the most common misconception: ‘Old School Magic is only for millionaires’.  Second most common misconception is that you can’t beat Power Nine decks. Come on! Drop that mindset. Let’s just beat them! It’s fun and you really don’t need a big bank account to do so. Of course it’s not easy, but with the right preparation, strategy and mindset you can. But before we start to brew an Old School Budget Deck, it’s important to know what our rich buddies like to play. Old Schoolers probably already know this, but my goal is to convert Non Old Schoolers, right? So I have to go into this first, assuming the newbies already have an Old School heart but that their brain can use a little refresh in knowledge. 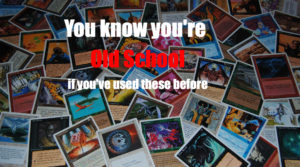 Of course you don’t know exactly what deck the Alpha Rich Guy (ARG) is going to play, but it’s a safe assumption that he wants to play his Power Nine. Cuz, be honest, if you had them you’d probably want to play them too. Basically anyone playing a Power Nine has three key advantages that increases their chances of winning. These are mana advantage, card advantage, and turn advantage. And these advantages come at a very reasonable price with the Power Nine.  A cheap Mana cost, that is, not card value. Timetwister is also a very powerful reset button by the way. I assume that most of you (even Non-Old Schoolers) know all about the Power Nine. But if you want more info about why the Power Nine is considered so powerful, click here . Library is commonly referred to as the 10th Power card. And it is not hard to see why. Having an uncounterable Howling Mine that, in a pinch, produces a mana, can overwhelm opponents in no time at all. We all know how important card advantage is in Magic. With a good amount of card advantage produced at a reasonable cost, any good deck should be able to beat any other good deck that is without the benefits of such card advantage.

A last advantage our ARG has, are dual lands. As a spike he wants to play the most powerful cards. Duals in general improve your mana base, but is also makes it easier to splash powerful cards like, Demonic Tutor into your tier 1 deck. Together with cards like Sol Ring , these are cards that see a lot of play. And all these cards are all reprinted in Revised, Fourth Edition or Chronicles so they are available at a low cost for you too.

The Alpha Rich Guy you want to beat has a superior mana base and is most probably playing a 3, 4c or sometimes even 5c deck using his moxen and a lot of dual lands. He will have more speed than you using his Power Nine to take mana and card advantage. A turn 1 Library of Alexandria is his wet dream.

With this basis he can play any deck he wants from Aggro, Midrange, Control to Combo, doesn’t matter. He can play any card. And the spike players will of course preferably play tier 1 decks.

The good news is there are a lot of strategies and hate cards that can support us in our quest to beat the ARG. Next week I’ll write about that. So, for a deeper dive into the metagame have a look on Wak-Wak deck archetypes archives, the Raging Bull blogs for reports about Swedish 93/94 events and the /r/oldschoolmtg subreddit for blog posts and other new content. If you’re Dutch also go to OldSchoolMagic.nl , to find a ton of information about Old School Magic.

4 thoughts on “The Art of Building Budget Decks, part 1: Know Thy Enemy”