By now we should be ready for building some Old School budget decks. If you need a little reminder into why you would want to play Old School Magic, you can find 5 reasons here. The main thing to remember is that Old School is about having fun while playing cards, drinking and chatting with fellow enthusiastic mages.

Still, it more fun if you don’t get beaten all the time so to remind you what you are up against: read about that in this blog.  Ok then, if you are ready let’s finally start brewing some budget decks. Oh and for the ones looking for the definition of a budget deck: there isn’t one, not a universal one at least. It is a personal matter. But when I talk about budget I assume that you only buy cards below € 100,-. And if you do manage to squeeze in some cards above €100,- you’ll stay under a total deck budget of € 500,-. These are also the rules that apply for the Uthden Troll Cup, as you can read here.

You are playing against decks that have a huge mana advantage (moxen, lotus, duals)  and card advantage (Ancestral, Library). So if you want to have a chance playing aggressively is probably your best shot. Certainly as creatures and damage spells are relatively cheap. Many, many options are open for aggressive play but if you don’t have duals, playing a mono coloured deck is the best option.

Of course a two colour strategy is possible as well. Cards like  City of Brass

and Birds of Paradise

are excellent cheap mana fixers for this purpose. So a 2c Aggro for instance ErhnamBurn’em or Pink Weenie,  like the one Lorien Elleman played to win Relic War III, are playable options. And  even some of the mid-range decks like Troll Disco or ErnhamGeddon and if you really want it even a UW control or prison deck are within reach. In this blog however I will first focus on budget versions of the mono coloured aggro decks.

The presence of Library of Alexandria alone justifies Strip Mine being present in almost every deck. But as you are on a budget and playing aggro you also need to get rid off Mishras Factory and Maze of Ith (not restricted in Swedish OS!). Mishra’s Factory is the most played card in Old School. The fact that they can block, tap themselves and deal damage as a 3/3 creauture is a major hurdle to overcome for most weenie aggro decks. But now you know it, so let’s prepare ourselves. 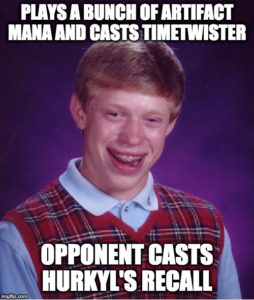 So we have seen that you already need answers to destroy lands and artifacts. Then why not make it an in built strategy to slow down your opponent in general. Land destruction and artifact destruction spells are available in all colours. Here are some of the cards that have proven to be good answers. 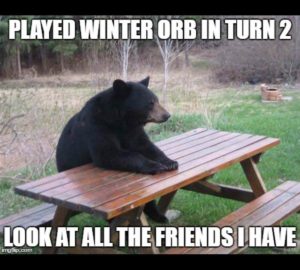 Strategy 3: Talk to the Hand!

Card advantage is often the road to success.  And blue powered decks have plenty card advantage with Ancestral Recall, Timetwister and Time Walk. Throw in a Library of Alexandria, Mana Drain/Braingeyser and some Jayemdae Tomes and you have an almost unbeatable decks. There is a reason The Deck is the most consistent tier1 deck in Old School Magic.

There’s two ‘hand’ strategies against it that have proven to be successful, discard or punish. The most successful punish strategy is to use Underworld Dreams. It is by far the most feared anti-draw card for blue power players in general and The Deck players in particular. Once there is a Underworld Dreams on the table takings extra cards comes with a lot of pain. And cards like Timetwister often become  useless suicide cards. The other strategy, discard, often involves Hypnotic Scepter. I guess there is a reason that Mono Black is a consistent top performer in Old School as well. Most of the times it uses both strategies combined. But there are of course many more cards that disrupt or punishes your opponent. Land and artifact destruction spells already take care of Libraries and Jayemdae Tomes, so let’s see which cards specifically target the blue card advantage machine.

So now we have some strategies in the back of our mind, let’s start brewing, click here for part 3 that goes into 5 mono coloured budget decks!

1 thought on “The Art of Building Budget Decks, part 2: Strategies”