Finally, finally. It has taken some time but now we really are going to look into 5 budget decks that are fun to play and have a decent chance of beating powered opponent. And it’s about time. We dived into reasons why we should play Old School Magic. We have analysed our Power playing opponent here and came up with some strategies to beat them. Time to play now.  Hopefully you’ll look at these decks as inspiration. Don’t copy them blindly but adjust them to your play style, preferences and the local meta game. Enjoy! 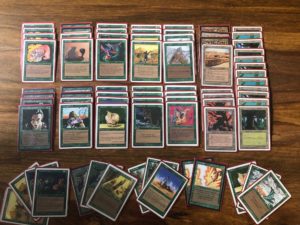 This Old School Version of Mono Green Stompy is inspired by Nikita Shelest, who has been playing versions of this deck like forever. This year Nikita took it to a 5-0 and won the Hovveturningen (Main Tournament).

This Mono Green Stompy is fast and furious and drops a lot of threads very early on.
While stomping away your opponents life it attacks your opponents mana base by killing Moxes, Mishra’s Factories and other lands with Crumble and Ice Storm. If necessary Scavenger Folk will sacrifice itself to keep his brothers in war pushing through. Giant Growth is for extra punch or to get rid of huge blockers. Berserk is usually used for a last final attack. When desperate it of course can also be used for attacking Hippies or other annoying stuff your opponent is sending to the battlefield.

The sideboard should of course be tuned to the local meta game. This deck contains 2 Lure to either do the last evasive attack or to kill creatures like Royal Assassin and Time Elemental that otherwise don’t block. Alternative cards worth considering for the meta game are Shanodin Dryads Overall its tested to be pretty competitive when played right. And as it is pretty straightforward you will not likely suffer much brain damage. Another big plus in tournaments is that it usually kills your opponent pretty fast, so you will have plenty of time to drink some beers afterwards

Ice Storm and Berserk are the most expensive cards in this deck. An alternative for Ice Storm can be Winter Orb. A possible replacement for Berserk is Wyluli Wolf 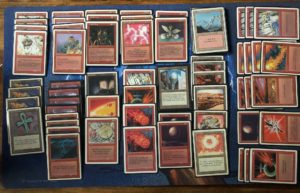 This mono red goblin deck is very aggressive with 10 burn spells and fast little goblins that can become a massive pain in the ass when Goblin King enters the battefield. Especially if you manage to drop a early Blood Moon ensuring them to go mountain walking like mad. Ball Lightning are nice surprises in general and keep you going even if your opponent drops a The Abyss. I have added a Fork:Revised because of the versatile use it provides. You can copy your own spells, fork an opponents Counterspell, copy an Ancestral Recall or maybe even a Mind Twist. That’ll teach them!

City in a Bottle is by far the most expensive card in this deck. You can replace it with some more aggression (another Ball Lightning or Fireball) or go for an alternative hate card. Another Blood Moon, Vise, Shatter or maybe a main Red Elemental Blast (against Serendib Efreets and Blue Power). 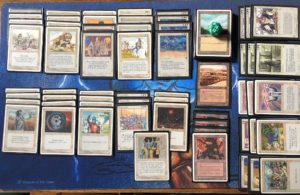 This version of White Weenie is inspired by a winning version of Henrik “Brorsan” Jerberg. He took it to victory on Kingvitational and BSK in 2013. Yeah that’s quite some time ago. White Weenie used to be a very popular deck in Swedish Old School but has been waning in the recent years. Don’t know why to be honest. Maybe because more and more people have collected their duals and Power 9 and now play fully powered?

Anyway this deck is still a very strong choice, it will give you very efficient strong creatures that grow into little monsters with Crusade and Army of Allah. Besides that is has the best removal with 4 Swords to Plowshares, 4 Disenchant and a Balance. These 9 cards find their way in many, many Old School Decks.

This deck performs best when it can follow a simple repeatable pattern. First you throw out a fast growing army, then you back them up with Crusades and Army of Allahs. Once you have a dominant position an Armageddon usually is the last nail in your opponents coffin.

Armageddon and Disenchant main will help you prevent an opponent in taking over initiative. Balance can work as a reset button in many ways. The sideboard contains a lot of artifact hate with Dust to Dust and Divine Offering.

The Thunders Spirits (95 euro each) and King Suleiman (75 euro) are the most expensive cards. To replace the Thunder Spirit you can consider to put in 2 Serra Angels main and transfer some Preachers from sideboard to main. Alternatives for King Suleiman: Spirit Link can neutralise big Djinns or Efreets and make you gain a life each upkeep, an extra Preacher can do the work as well. And of course white also has Circle of Protections. 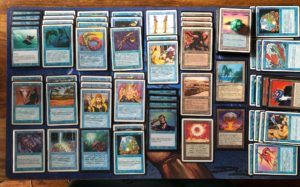 Fish is starting to become a more popular choice lately. Jordan Boyle finished top 8 with a powered version of this deck on NoobCon XI this year. Have a look at his report here. Obviously there’s no room for Ancestral Recall and Mox Sapphire in the budget version, still it remains a very strong deck without the power cards.

Many people play blue power and have at least splashed some Islands, so if you play Islandwalk you can hit an opponent very hard. A DanDan backed by a Lord of Atlantis often is lethal if it isn’t answered quickly. And if you run into a mono black or green deck you can always use Phantasmal Terrain to go Islandwalking after all. Counterspells and Control Magic give some nice control to keep the game at your advantage.

The 2 mainboard Energy Flux are a pain in the ass for any deck heavy on moxes or other artifacts. Phantasmal Terrain help you to dismantle a Libraries of Alexandria or other annoying lands like Maze of Ith. If you encounter Moat or Abyss, bounce cards like Time Elemental or the Boomerang in your sideboard give you a second chance to counter them.

The CE Chaos Orb and the Mana Drain are the expensive cards in this budget deck. Take them out and you can play it for about 125 euro. The obvious alternative for Mana Drain is Counterspell. Chaos Orb is more difficult. I think I would add another Clone to enhance the chance on copying your Lord of Atlantis. 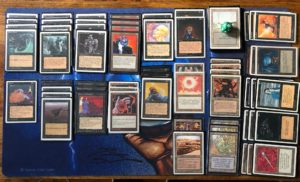 Mono Black gives you the most control of the listed budget decks. And has proven to be a consistent performer over the past years. In our Dutch community Roy Nijland took down some tournaments with Mono Black the past years Â and this year he debuted with a top 8 on Noobcon! If you look at the strategy analysis this isn’t a surprise. Hand denial, mana denial, reset buttons, they are all there. Hypnotic Specter, Sinkhole and Nevinyrral’s Disk are perfect strategy choices against any deck. Black Knight with his protection from white will do very well against all white splashed deck with Swords (many). And Maze’s of Ith will keep any fast aggro deck at bay for at time. And I haven’t even talked about Underworld Dreams yet. If there’s one card blue power hates…

But don’t underestimate the playing of this deck. You have so many answers, you often will find it difficult timing the right play at a specific given moment.

Underworld Dreams, Su-chi and Icy Manipulator are the more expensive cards in this list. You can try and make this into more of a black weenie deck, using Paralyze and Royal Assassin to tap and kill any creature threat from your opponent. Actually I regret that I didn’t put a Royal Assassin on this deck list in the first place. Such an iconic card deserves a spot in any mono black deck.