In my first blog I told you that my goal was to convince more people into playing Old School.  That the main thing I ran into so far is the misconception that Old School Magic is only for millionaires. So that’s why I wanted to focus on writing about OS budget decks that are cheap and competitive as well. But maybe that’s was little bit too fast. Let’s first give some more arguments for playing Old School Magic. This blog will give five reasons to play Old School Magic. If these reasons appeal to you then Old School Magic might be something worth investing time and money in. For those already into Old School: I love to hear your story, so please respond to this blog or post. Let’s tell the world why we love O000ld Sch0ool Magic! 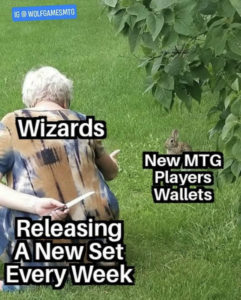 Old School Magic has a limited card pool of around 900 unique cards. For a growing group of (ex) players this is a feature and I’ll explain why. I’ve talked to many (ex) magic players the past years and one of the most heard of reasons why people quit playing magic is the fact they can’t keep up. Every 3 months there are new cards coming to the pool changing the meta-game. So if you want to play tournaments this means you have to buy cards every 3 months.  And even more importantantly put in a lot of time to adjust to the new meta game. When you are young and have not too many obligations this is no problem. But when you are at a job, have a wife and kids you seriously have to be a time wizard to find a few minutes for playing magic.  So because of lack of time most people then just quit or only occasionally pick up their old deck to play some casual magic with friends. But what if there was a format that is static and has a limited card pool? Yup, that’s Old School Magic!

The 93-94 card pool is pretty good and iconic. Power nine still are the most iconic cards in Magic the Gathering. But there are so many more cards played in Old School Magic that you will not see anywhere around. Take a look at this Eureka deck game played at the Giant Frost Cup. I’m pretty sure you will not meet this kind of deck anywhere outside of Old School Magic. Personally I rather play against a cool Eureka deck instead of some storm or dredge deck killing me in round 1 or 2.  And if you think these spicy brews are an exception, check out some more video’s from Timmy the Sorcerer.   For instance this game featuring a Kobolds deck.  Timmy expresses it as follow: ‘This is why I love Old School Magic. In what other Magic format can you win by playing a Howl from Beyond on your Kobold of Kher Keep? Come on!’.

Yes, it’s designed for nostalgia.  Many of the current Old School players started playing MtG in the Nineties.  Magic was the new hype. It was exciting to see that in a short time everyone under 30 started playing Magic. It was everywhere. Kids and teenagers were playing it at school and students played in pubs and university canteens.  And these were the pre-internet days. You couldn’t find decklists all over the internet. Besides some Scryes and Inquest there was hardly any information at all. It was all one big discovery and adventure.

The formats weren’t too much dominated by specific perfectly tuned decks and most people didn’t worry about their DCI ranking. It was an exciting and at the same time friendly and relaxed time. Old School Magic is trying to emulate that feeling. And in order to do so it uses the same prints as back in the those days. For that nostalgia feeling yes. Another plus from the print policy is that you don’t have to read too much cards. You simply recognise them by print.

The one thing that really got me hooked again is the Old School Spirit. Tournaments are played in a friendly atmosphere. Most tournament are not registered (no ranking points) and have no big prizes for the winner of the tournament. So that means you do not have to fear losing any of your precious Planeswalker Points. There is only honor to win. It also means you can chose to play competitive or a spicy fun without suffering the consequences of losing ranking points. This sheer fact encourages the play of more spicy and fun brews. Many spikes simply choose tournaments where they want to spike and others where they want to experiment with a spicy brew.  On top of that more and more tournament organizers encourage playing spicy brews by giving prizes for most spicy brew or best ranked unpowered or budget deck.

The result is that the playground is in general more friendly and diverse. People don’t slaughter you when you forget something in your upkeep or accidentally played out the wrong land. Just take it back and do it right this time. Of course this doesn’t mean you can make unlimited mistakes, but it does show that in general Old School players acknowledge Magic is a difficult game and tend to help each other in making better plays instead of calling a judge and demanding warnings or game losses. All together it results in a very friendly atmosphere giving you a hearty welcomed feeling to the community. Just like back in the days.

Iconic cards, Nostalgia, Old School Spirit etc it’s all meaningless if you can’t share it with like minded people. So if you are highly competitive, young & wild, have all the time in the world, don’t understands the nostalgia bla bla of these old dudes and don’t give a shit about old cards, well then probably it’s not for you. At least not yet…

By no means this is saying that Old School has no room for highly competitive or young and wild people. Many spikes enjoy playing  Old School Magic. And about the ‘young and wild’: have you ever seen a live-report from Noobcon?

Noobcon is the Old School World Championship (at least until 2019, after 2019 Fishliver Oil Cup will organise it) and well if you take a look at it you’ll see a bunch of crazy guys getting drunk on beer, whisky and cigars. What more prove is there to give that Old School is about fun and having a good time.