Oh boy! Another Scryings spoiler. The first card I was asked to spoil was Pox, a very spicy black Ice Age rare. A well known card but one I had never played with. This second spoiler is the complete opposite. It’s a typical red creature from Ice Age which I’ve played to death. 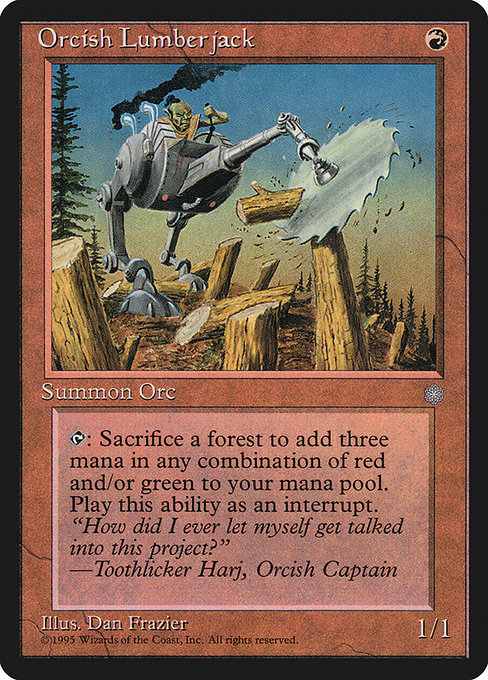 1 red mana, 1/1. Sure, nothing special. However you can tap it to cut down a forest and generate 3 mana in any combination of red/green. Back in the day nobody I played with had a Black Lotus and only some had a Mox after several years of playing. While today a 2nd turn Erhnam Djinn might not be that special, back in the day it was. Sure you could do it in multiple ways but a T1 Lumberjack followed by a T2 Erhnam Djinn was definitely a very viable option.

Is it really worth sacrificing a forest, cause doesn’t that hurt you to much the following turns? Who cares! Chopping down a forest to cast an Erhnam is just to sweet. And don’t forget that you don’t necessarily need to cast an Erhnam. What about an early Shivan Dragon? Or a pretty big Fireball? The biggest problem with these Scryings card is which deck to build first…

The art of Orcish Lumberjack is also fantastic. This is exactly how I would think an Orc would chop down a Forest. The flavortext is hilarious: “How did I ever let myself get talked into this project?” —Toothlicker Harj, Orcish Captain. I didn’t play MtG for almost 15+ years and it’s a card I’ve always remembered. Why this card has never been proper reprinted is a mystery to me. Just 20 more days till we know how Scryings looks like. 116 mostly playable cards mixed with plenty of spice. While I’m a big fan of just playing Old School, I can’t wait to play some of these cards!