Scryings? Yes, Scryings! Haven’t you heard, there’s a new old MtG set about to be released. A set of 116 new old cards, handpicked by the founding father of Old School, Magnus himself. So, after years of discussing if Fallen Empires should or shouldn’t be part of the format, he’s going to add 116 new cards to the Swedish format? Well, yes and no. The Swedish format remains the Swedish format. But there will be a new format which consists out of Swedish + Scryings.

Another format? Yes, another format. There are many people who dislike having so much different formats already in Old School. And while I can agree with this sometimes, I think there’s a difference between changing 1 rule or 2 cards on the B&R list and an idea like Scryings. Tournament organisers and communities can decide themselves which formats they play, with Scryings this is no different. It might be fun only 1 time or it could be the next best thing, who knows?

Today I have the privilege to announce one of these new cards. Some cards already have been released, to see an overview click here:

Let’s get into it:

While I started playing Magic just before the release of Ice age, I actually can’t remember I’ve ever played with this card. As a beginner, cards like this were just to “complex”, you would look mainly at creatures, the bigger the better. Since I’ve opened a huge amount of Ice Age, I do remember this card vividly but I never paid a lot of attention to it and traded or sold it away. When Magnus told me I could release this card, I thought it would be fun not to google for decktech and try to brew with it myself. Without further ado I hereby present you: Now this is 1 spicy card! A third of your life rounded up is 7 life when you are at 20, just for BBB. The “round up” part is pretty crucial since if your opponent has just 1 creature, he has to sacrifice that 1. If he has more, it obviously depends. Sacrificing lands is probably something that’s always going to hurt both parties equally but at least you know it’s coming. It’s a bit of a black Balance, only totally different 🙂

The BBB casting cost skews your options towards black centered decks. It would be worth knowing what other black cards will be part of scryings but without knowing all of them we should look at today’s black decks in Swedish and see if Pox would be an addition to these decks. Let’s start with Mono Black, I’ll use the winning deck of GoTKoT III from Roy Neijland as an example:

The problem with Mono Black is that you play creatures and it’s not the fastest deck out there. The 1/3 life can help or hurt you, the 1/3 creatures would definitely hurt you and I can’t see how the 1/3 lands can really help you here. I don’t think Pox is going to see any play here.

Would it fit Deadguy Ale on Steroids then? Let’s have a look at the deck which I’ve played in Barcelona:

I definitely don’t like to sacrifice my creatures to a Pox. The damage is great but losing life yourself is pretty tricky with this deck since your opponent and your own Juzam’s often deal quite some damage. No, Pox is not going to be a fit in these 2 archetypes.

It looks like a card which could be the center of an archetype on its own and/or fit best in creatureless decks. Now it could be that this archetype already exists. If I’m really honest I vaguely remember a “Pox” deck from the past. However, I have no clue if it was any good and I have no clue which other cards it contained. So, while some of you might already know how to use this card properly, I don’t!

The best 2 non-creature cards in black are Underworld Dreams and The Abyss, besides the obvious auto includes Mind Twist and Demonic Tutor. The Abyss is used in control style decks, which normally likes their land and life very much. There’s are 2 cards often used which can help you a bit with life which are Drain Life and Ivory Tower. I got 2 idea’s and since I unfortunately don’t own a Pox, I’ll use Manastack to build a deck.

I love to play Dreams combo and actually my favourite way to play it is full gas. I’ve used my typical Dreams build and removed Recall and The Abyss for Pox. This definitely helps the full gas plan since instead of these slow cards I’ve added a card which deals on average 4 damage, removes at least 1 creature and slows down your opponent a little by removing at least 1 land. Since this deck is already pretty black centric, the BBB is less of an issue. Especially since I’m already playing with Dark Rituals. 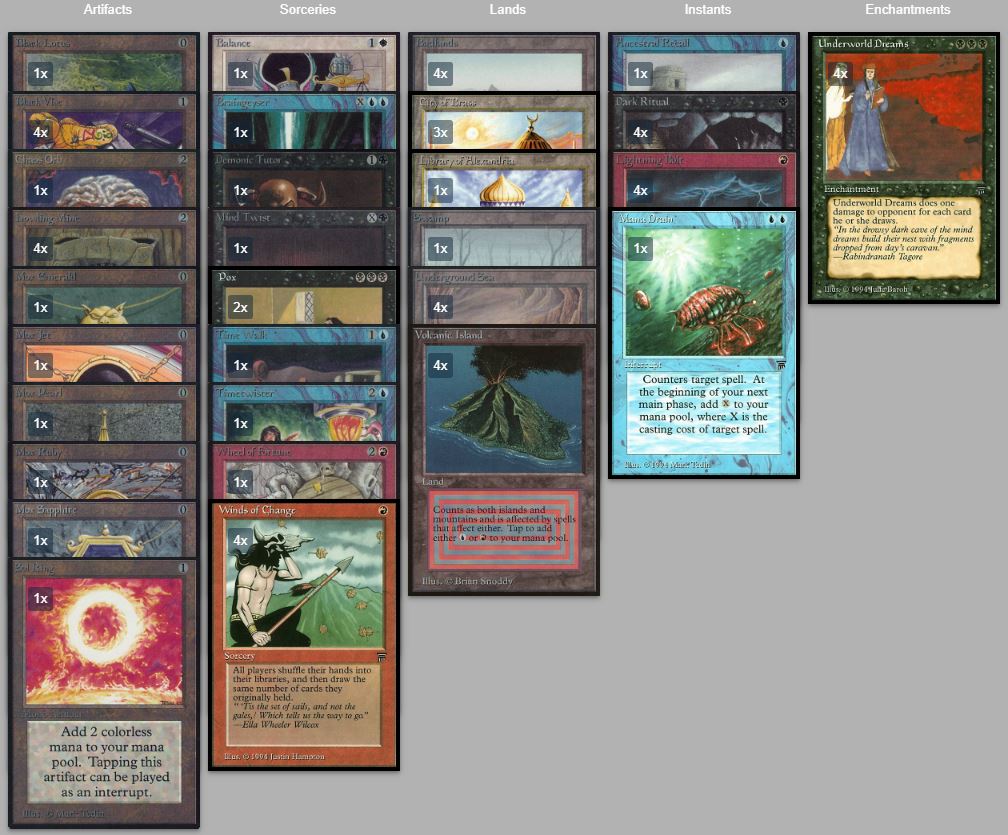 Yes, I think I like Pox in this deck, I like it a lot actually. I have no clue if it really works but only time will tell. Pox does really feel like a card you want to try out.

I’ve brewed a lot of mono black and black/white parfait lately for the Team Unified World Cup in London. Henk was playing this deck as “3rd deck”, which means he had to build a deck from all the leftovers his teammates gave him. Since that’s not a concern now, let’s see if we can add some Poxes to the deck. I didn’t build it parfait style like Henk played, but purely Tax/Tower. Again the Underworld Dreams is the wincon and I tried to get some synergies going on with Pox. 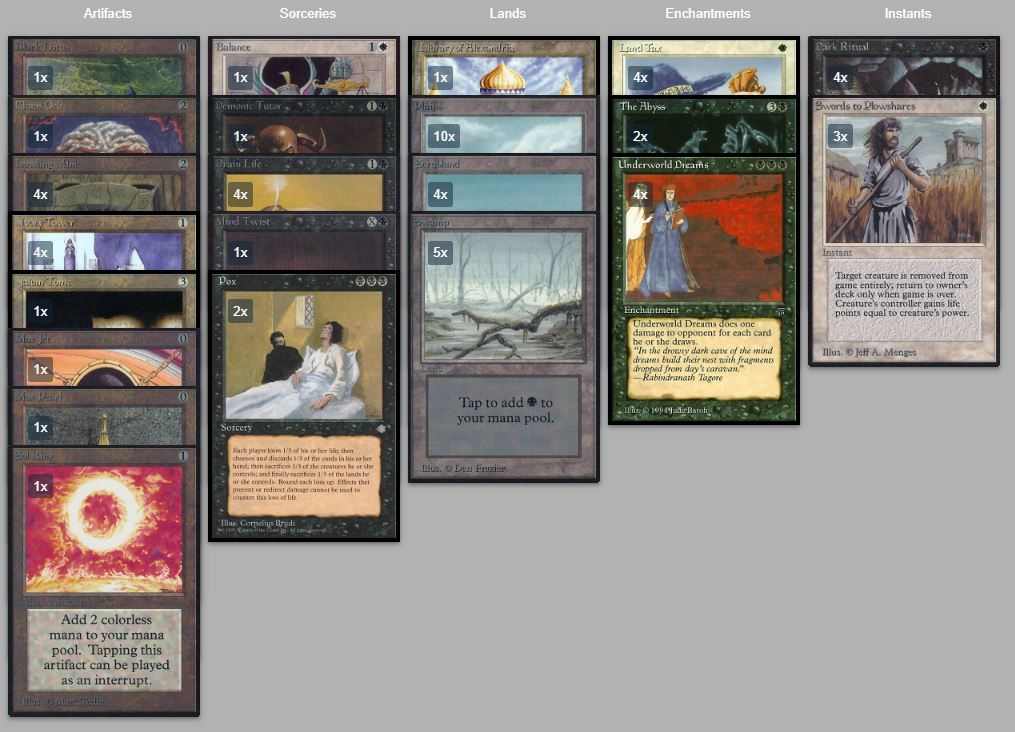 Ivory Tower and Drain Life help to make up for the Life loss. The Land Tax is obviously to get the life flowing from the Ivory Tower but also helps with any land loss from the Pox. Sure, we do want our opponent to have more lands then we have, but that’s in our own control. While normally creature removal could be a blank in creatureless decks, Pox is never a blank because it can deal some nice damage. Again, I’ll have to playtest to see if this actually works but it’s something to try out!

I’ve just done some random brewing and probably have overlooked something completely but I had fun nonetheless. Pox is a pretty unique card to try and break and probably some of you already have some great ideas lined up. I definitely didn’t break it and I would be happy to know what your ideas are?

At the end of December, we know all cards which are part of the new set. Magnus will use Scryings during the N00bcon weekend in April and I expect other people to build decks to play for fun at the kitchen table and/or after tournaments are finished. In the Netherlands we normally organise a side-event during T8 and that’s what we’ve done for the Raging Bull Series last year as well. Therefor for this year’s Raging Bull Series we are going to organise a Swedish + Scryings side event. Check out all information about the upcoming Raging Bull Series here, sign-ups are open!