Last Sunday Joep organised a Fallen Empires draft to celebrate its 25th anniversary. We weren’t the only community in the world who planned to celebrate the release of Fallen Empires. While in the Netherlands we don’t play with Fallen Empires in Old School, it’s still a set we all consider Old School and we were eager to draft it. The draft was an “open” event, meaning everybody could join. However we did count this draft to be part of the Reborn League as well. That meant that all people who are in the Reborn League could put their drafted cards in their separate Reborn pool and use these to trade (with other Reborners) or put them in their Reborn constructed decks. 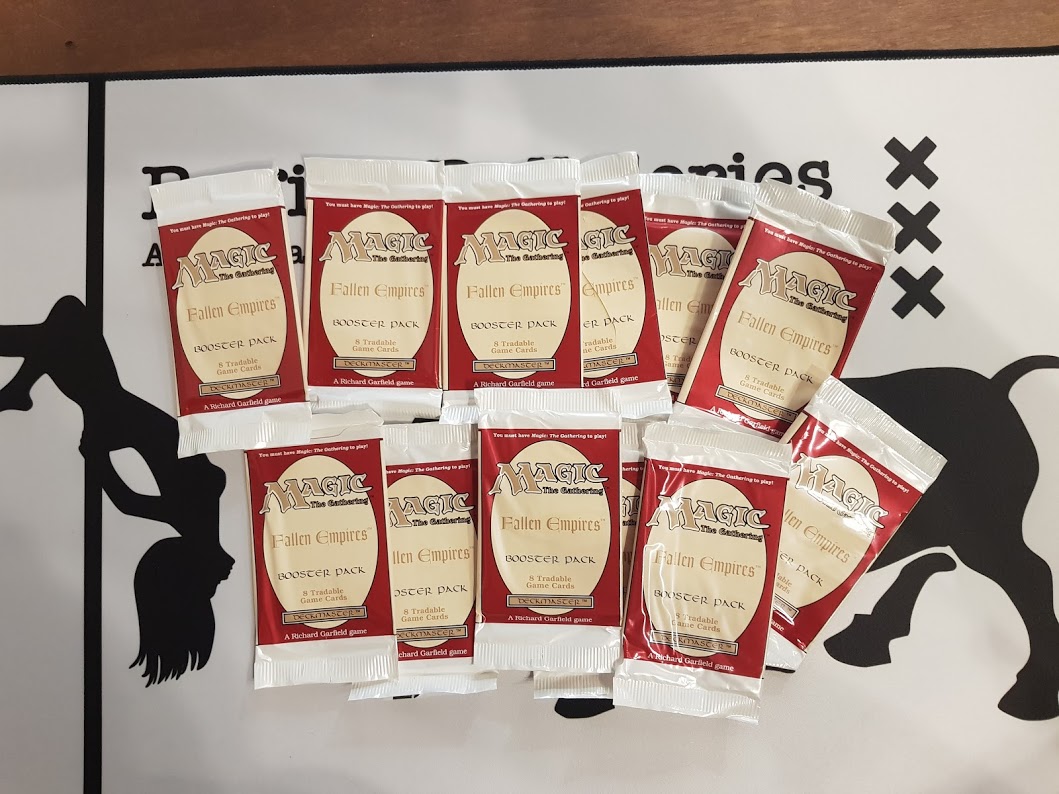 Most people are aware that Fallen Empires is not the best set to draft. There are hardly any removal cards in the format and most creatures are relatively small, meaning most games end up in big stalemates. Joep tried to make it a little more interesting by drafting 2 boosters at the same time. This would lead to more choices to be made by the players as typically in 1 booster their might be only 1 or 2 “good” cards.  In my opinion this actually made a huge difference, it definitely made the drafting more enjoyable.

Even while it was ” just”  Fallen Empires, I still wanted to do well and therefor I did ponder about some strategies the night before. My quick analysis of the colors were:

I figured beforehand that most people knew about white/black being the best colors. Also these colors add some good cards to your Reborn pool which makes it even more likely that people would draft these. I expected some people to overvalue red, not knowing it lacks good goblins. Therefor green felt like the sweet spot to be in. Since the pump knights really win games due to them being first strike, I figured to go for an anti pump knight strategy. Drafting as many Thorn Thalids (3 counters do 1 damage) as possible and as splash I wanted to go for white. Not so much for the pump knight but to get some Icatian Javelineers and maybe a Icatian Phalanx (2/4 banding).

Coming up with a strategy is nice but it all depends on the first packs you open. With 18 players we made 3 tables of 6 players and the order at our table was: Henk, Joep, Bob, Mari, Gideon & myself. I knew Henk was on the fence between black and white for his Reborn deck beforehand. Bob typically plays white in drafts although is experienced enough in drafts to adept to any strategy. Joep is trying to create an artifact heavy deck in Reborn so the Reborn angle hardly effects him. Gideon is on mainly Red for Reborn, making it more likely for him to play Red. On Mari I have little info. While this is nice from an analysis point of view, everything can change after opening the first pack. And playing a certain color in Reborn doesn’t mean a person is going to draft for these colors.

In my first 2 packs, I had 2 Order of the Ebon Hand, 1 Mindstab Thrull and 1 Icatian Phalanx. While the Order is probably the best card, passing all these black cards is making it more likely for my opponents to focus on Black. I decide to stick with my strategy, pick the Icatian Phalanx and settle for green/white if possible. The next couple of rounds I try to get as many green cards as possible which worked okay. However after some time I notice from the passed packs that Gideon is most likely on the same colors. That’s really a bummer!

Pack 3/4 contain no green cards at all and I’m still low on white cards in general, but also Javelineers specifically. My Thorn Thalid plan seems to work but when getting passed a Hand of Justice (1 of the few creatures which can remove other creatures), I decide to pass on it due to not having enough white cards. I’m really happy to get a Fungal Bloom(Add 1 counter for GG) which can be a “finisher” late game. Just like my Feral Thalid (6/3, regenerate for 3 counters), 1 of the few big creatures in the game. Pack 5/6 is just about adding more Green/White cards and overall I’m pretty happy with my pile. 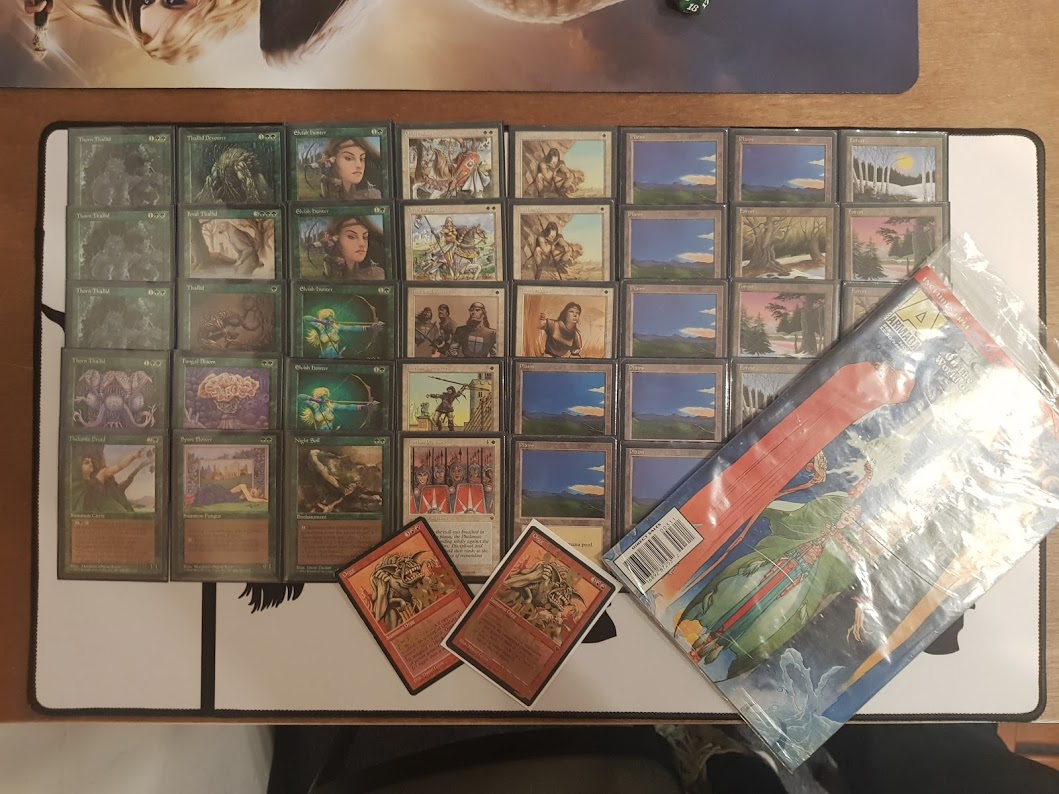 First match I’m playing Mari, my team mate during the Team Unified World Cup the week before in London. I know Mari got the Hand of Justice so he’s playing white and he has mixed it with black. When he drops a Combat Medic I know my Thorn Thalids have to work a little harder. I also immediately realize that they don’t have to tap, being able to prevent X damage is much better then I expected it to be. A missed opportunity since I haven’t drafted a single 1 of them. Mid game I’m in control, just waiting for my Thorn Thalids to be able to deal enough damage, which is taking longer each time Mari plays another plains due to his Combat Medics.

While Hand of Justice is his “out”, I’m playing Elvish Hunters. Elvish Hunter needs to tap for 1G which makes another creature an opponent controls not to untap next turn. What most people didn’t realize up front however, is that you can activate this ability every turn. Which means your opponents creature doesn’t untap at all anymore. Therefor the Hand of Justice can kill at most 1 creature. It takes a while to win the 1st game and due to time we draw the 2nd one.

Frank started with a Deep Spawn (6/6 Trample) in his first pack and ended with 3 of them. Yes, 3 Deep Spawns! That means Frank had no other option then to play blue, next to his mainly white cards. Blue is however the slowest color which is the worst strategy against my deck. Even if the Deep Spawn can attack, I just need 1 Elvish Hunter to hold it at bay the next turn. Frank concedes the first game to try and win the 2nd but doesn’t succeed. The “spice award” wasn’t awarded but with 3 Deep Spawns Frank should have gotten it 🙂 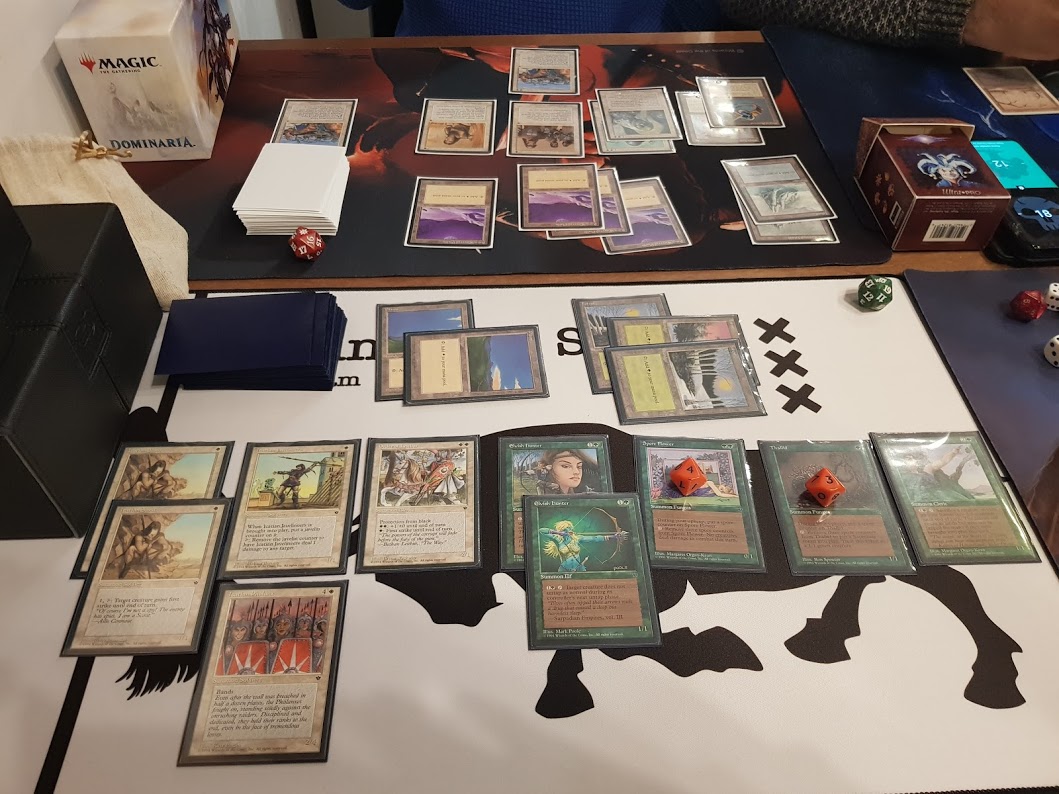 Gideon was sitting next to me in the draft and drafted the same colors. Since he was before me in 2 out of 3 rounds, I’m really wondering what I wasn’t able to pick up during the draft. Gideon has a lot of similar cards but not as many Thorn Thalids. I manage to table my Thorn Thalid faster then his, meaning I can start stacking counters. However he plays so many threats that I have to keep using my counters to kill his creatures. Even with 3 Thorn Thalids I’m not generating counters fast enough so I’m really waiting for my Fungal Bloom so I can start creating additional counters.

Ron made the finals just like the last 4th Edition Sealed Tournament. Again Ron is on Black with a mean red splash. Orders, Hymns and a lot of Thrulls, including Thrull Champion! Ron mulligans to 6, is not able to cast a Hymn T2 and I’m happy with casting my first Thorn Thalid. Since Ron can sacrifice his Thrulls to give his Orders more defense it becomes a very tactical game. However when Ron needs to save his Order from dying by sacrificing his Thrulls, his attack is successful but my Elvish Hunter comes to the rescue again, leaving his Order tapped for the remainder of the game. I’m slowly building towards the kill and Ron is waiting for his 1 (potential) out, Goblin Kites. While I’m not sure if the Kites would have been enough, it would have definitely been a surprise so I was happy to kill him in time.

Game #2 I’m again lucky not to be Hymned T2. I don’t have a T3 Thorn Thalid but I’m still able to hold off his early pressure. Since time is in favor of my deck, I’m again able to build enough board presence to be sure not to lose the game. After some time I’m able to go for the kill again and end up winning the whole tournament! 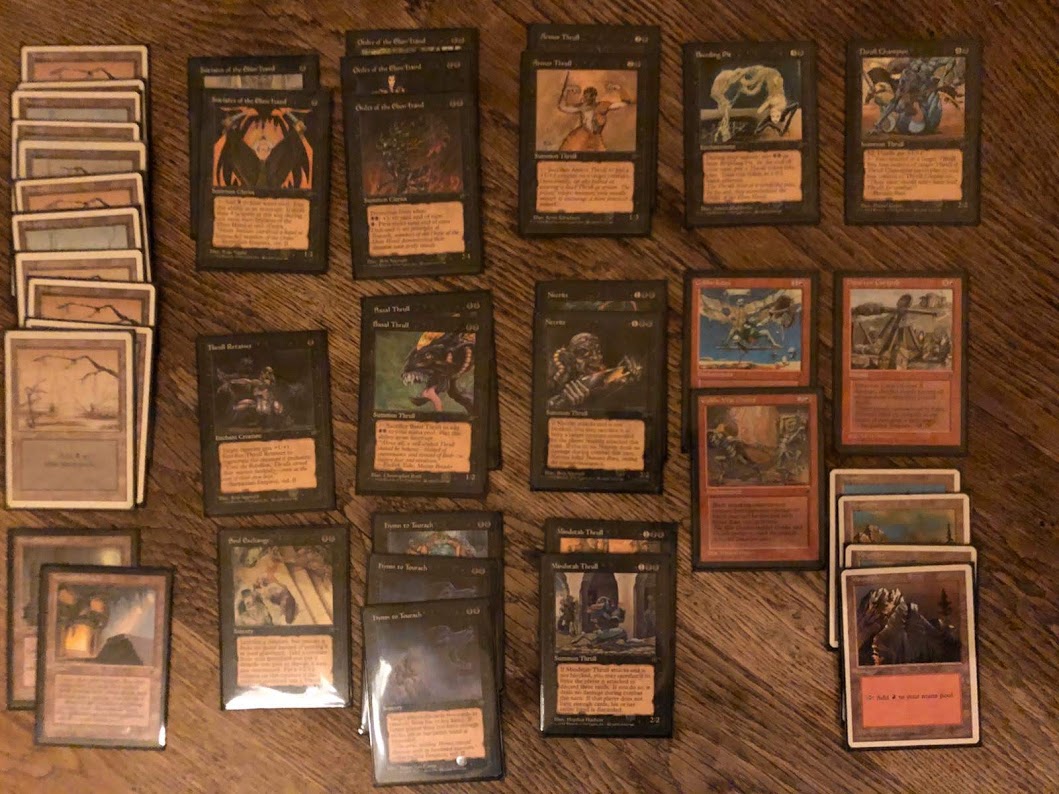 These matches most of the time take forever and while it can be a real drag, when you’re winning it feels a lot better. I think Ron’s strategy was probably the best one but as always in a draft, it matters a lot what the other people at your table are doing. Dodging Hymns is one of the most important skills there is and I’m really happy we’ve restricted this card in the Reborn League. I underestimated Combat Medic but also Goblin Warrens. We did have at least 1 player who was able to almost create infinite Goblins, a tactic I didn’t think was viable beforehand. Thorn Thalid and Elvish Hunter were definitely my MVP’s. Unfortunately I don’t think these are strong enough to end up in my Reborn constructed deck. They are good in slow games but Reborn will play a lot faster then Fallen Empires only.

Thanks all for joining another great draft. Many thanks to Joep for organizing it all and Robbert for being such a generous venue host again. Our next draft is the 13th of March called “The Ice Age is coming”. We leave Fallen Empires behind, draft 1 pack of 4th Edition and Chronicles to say goodbye to our previous “block” and add 2 Boosters of Ice Age and 1 Homelands to get into the next “block”. This will be a draft for only Reborn players but during summer I’m planning on a huge open Ice Age draft, drafting 4 Ice Age packs for anybody who wants to join! 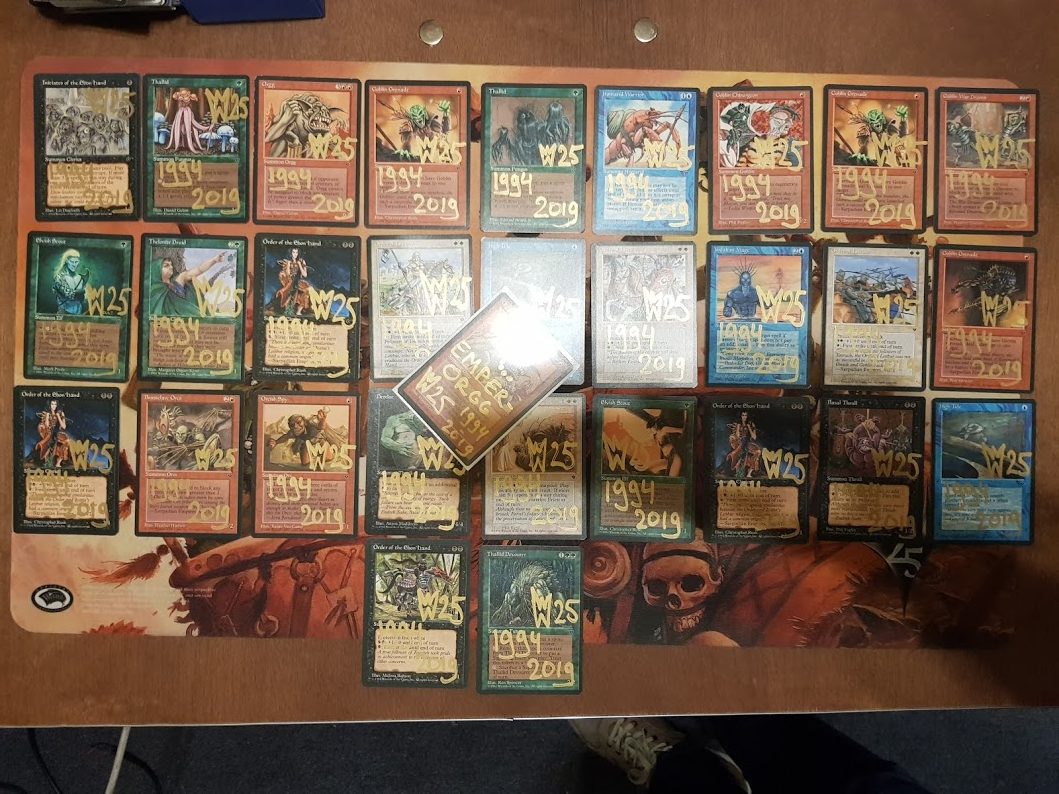