Each year Dave Firth Bard organizes two major OldSchool events, the Winter- and Summerderby. He does an amazing job for the community by doing this. Every tournament he mixes things up by using a different OldSchool ruleset. For the Summerderby 2021, the ruleset was Boreal (but with a restriction of Shahrazad). This meant 4 Strip Mine, 4 Mishra’s Workshop, 4 Recall, 4 Time Vault, Fallen Empires and Manaburn. 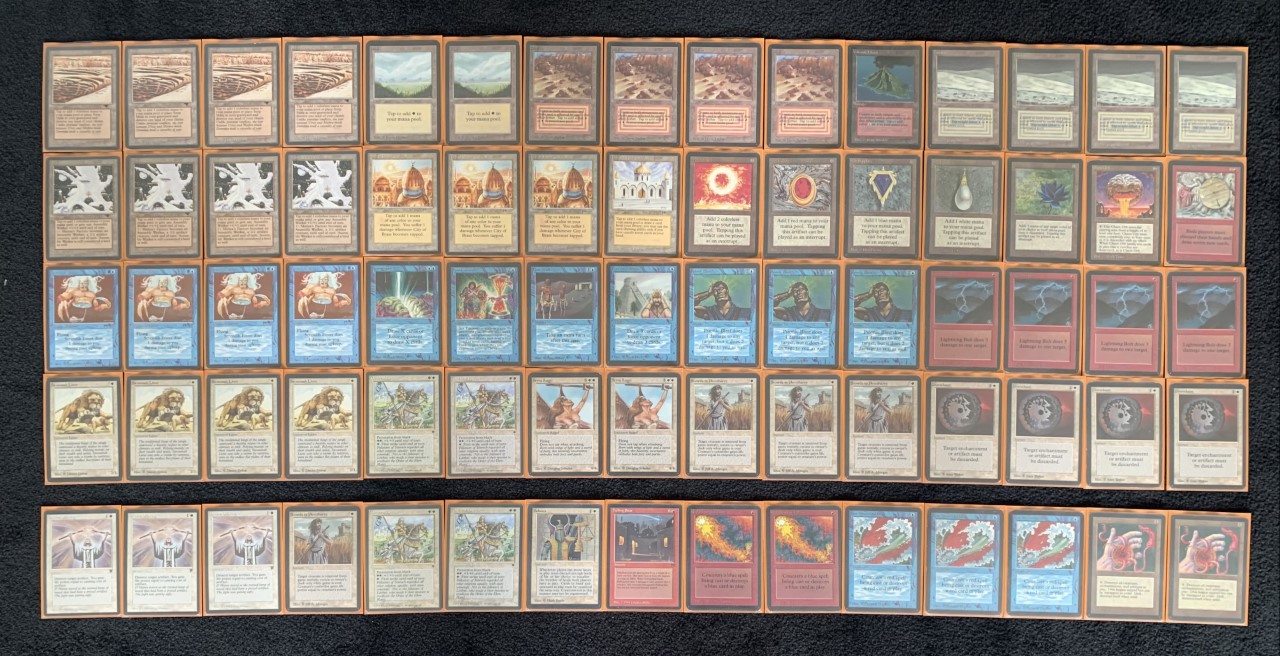 My list is very standard, but a few things stand out:
In testing, I played a lot vs Blood Moon. This was a problem for my 4-color testbuild. I decided to drop the black splash and add a second basic Plains. I wanted to kill Blood Moon as soon as possible and wanted to be able to cast my Serra’s even through multiple early Strip Mines. Gloom was a problem for my deck as well, since half of it was white. Looking for an answer, I ended up playing 2 Nevinyrral’s Disk in the sideboard. They worked great against Robots and black decks.

My first match was against my fellow countryman and the person who got me into OldSchool; Koos Cramer. Koos was playing an aggressive Atog build.
In game 1, I had to mulligan to 5 cards. Koos had a quick Mind Twist for my hand. And Ankh of Mishra, some burnspells and an Atog made this a quick loss for me. I expected him to play City in a Bottle and didn’t want to give him 7 cards, due to the burn spells. I sideboarded like this:

Game 2 he had to mulligan to 5. My opening of Plains, Mox Pearl, Lions, Lions was quite strong. He managed to play a Timetwister, but that got me a Serra and Time Walk to quickly finish him.
Game 3 he had 3 early Strip Mine for my lands. I did draw land, so it wasn’t over yet. He managed to play Vise and Ankh, but I got to play some creatures, so it was a race. Some burn on my Order and Lions and a Gloom, shut me down however. A second Vise sealed the deal. 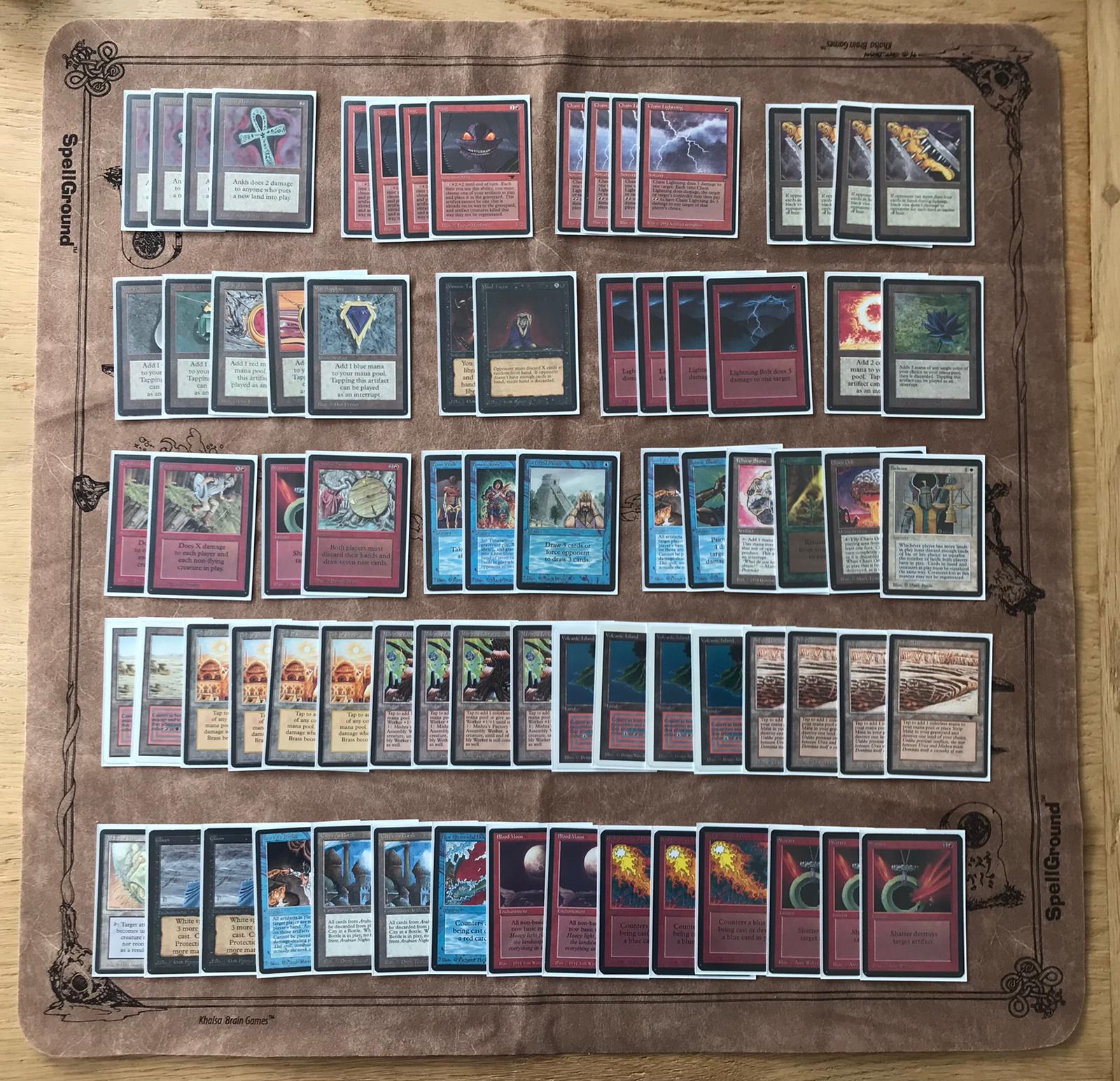 My second match was against Lucas Glavin. Lucas played The Deck.
In game 1, my Order and Dib were killed easily. Lucas then got a Book online. But it came at a price since his land were 2 City of Brass. My Factory and the damage from his own Cities brought his lifetotal down. I played a Serra, which he had no answer to and some burn to finish him off. In testing, the right strategy for me against The Deck, was to give up the cardadvantage game, since they are much better at that, and go in full aggromode, combined with manadenial in the form of extra artifact hate.

Game 2 Lucas mulliganed to 5 and I mulliganed to 6. My hand had 2 Strip Mine, so that was good for the manadenial part of my plan. This slowed him down a lot. By Red Elemental Blasting a Mana Drain on my Ancestral Recall, I got to draw 3 more cards. I killed his Factories with Strip, Bolt and a Psi Blast and thus my own Factory could keep on attacking. Eventually a Lions showed up. He played an Abyss, but I had the Disenchant for it. The Lions went all the way.

Match 3 was against Patrick McElligott, who started the first game with the classic Taiga, Kid Ape, go. I had kept a hand with 2 Factories, so I was quite comfortable. He then played an Argothian Pixies, and I had no answer. I Timetistered and that got me an Order, a Dib and a Serra. The first two were killed by burn, the latter eventually killed him. I didn’t know what to sideboard exactly, so I went with an anti-aggro plan.

The second game, I had a turn 1 Lions and he had a Bolt for it. This was the beginning of a few turns of each player playing a threat and the other player killing it on the spot. He then Mind Twisted my hand, but I was in full lucky topdeckmode. A Serra; Terror. A Troll from him; Plow. A Factory form me got him very low, but his Wheel of Fortune brought him Erhnams and I had no answers, so we went to game 3. Afraid of the Erhnams, I made some sideboard changes, since I wanted my Disks.

Game 3 was another ‘threat-answer’game; Terror for Serra, Plow the Troll, Fireball Lions and Order, Bolt the Pixie. I then dropped a Disk. In his next turn he Mind Twisted me again. In hindsight I blew up my Disk too early and he play a plethora of creatures afterwards, which I couldn’t handle. 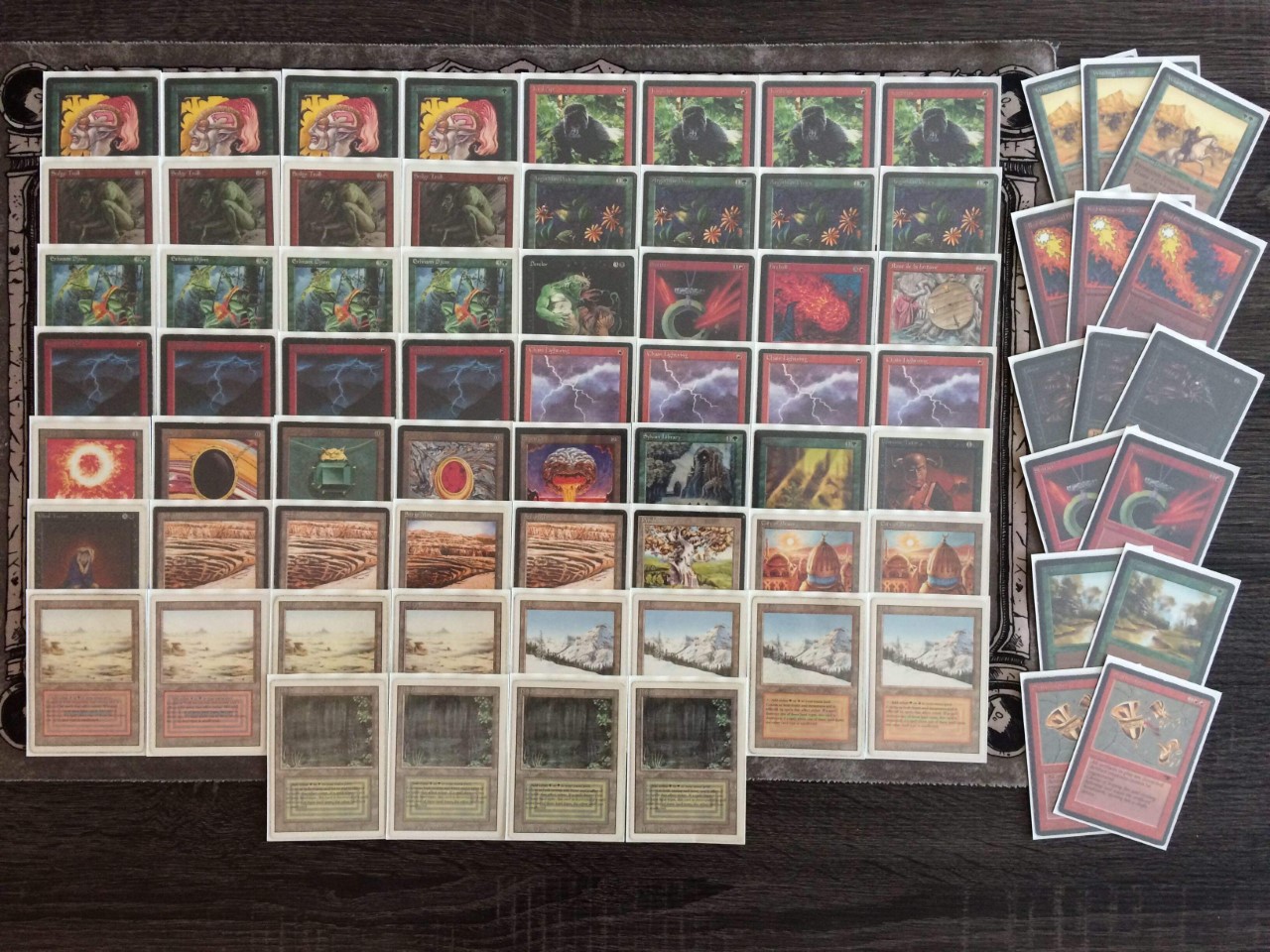 The last match of this Batch was against the Atog Lord himself, Rich Shay on robots.
A quick start from me with 2 Lions and a Bolt got him below 10. But then an Icy and a Balance took over the game for him. The Trikes hit the table and that was it. Since I’ve played Robots, I knew exactly what to board.

Game 2 my plan worked just perfectly. I kill everything he plays with all my removal. Eventually a Serra got there.
Game 3 was the same. Eventually a Serra got there. The key was to keep a Disenchant for The Abyss.
We had a great talk afterwards about the format, the different rulesets, possible (un)restrictions and about the Robots deck. I gave me a lot of new insight and I thank Richard fort hat! 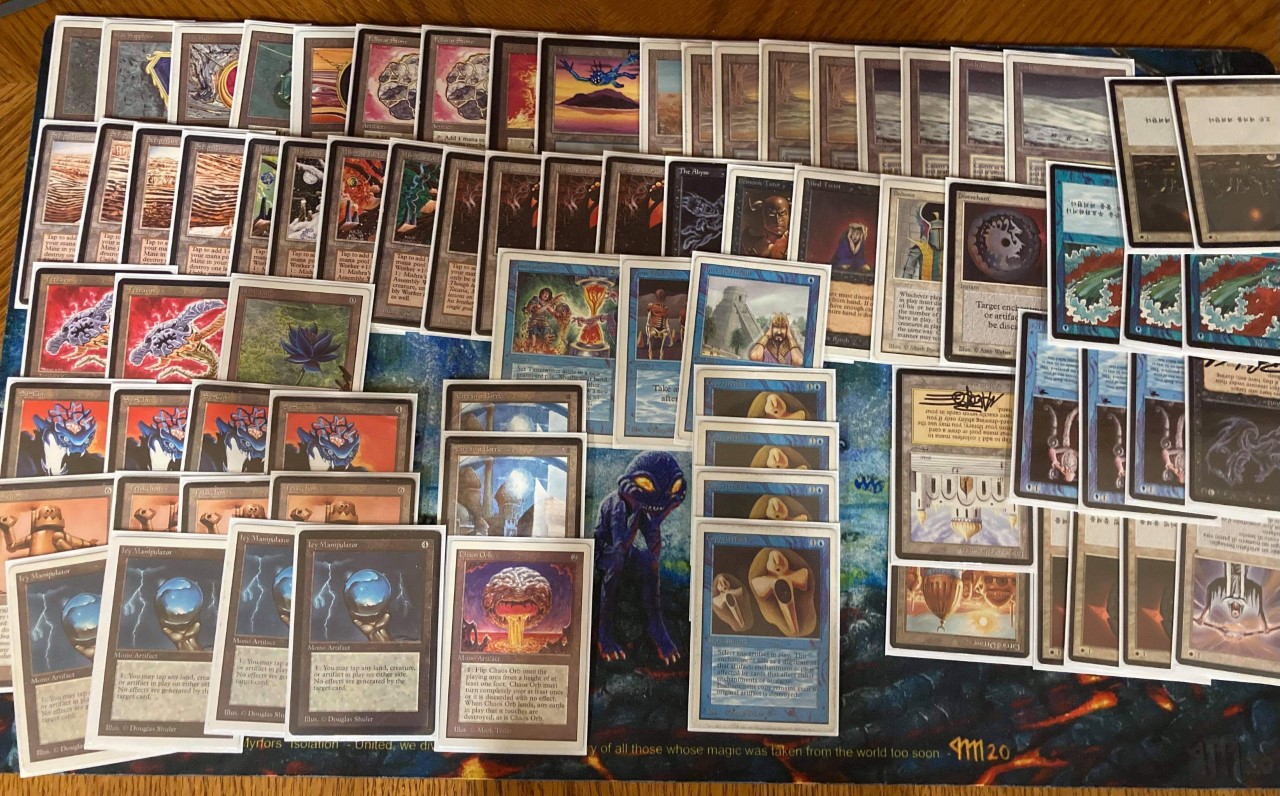 So the first Batch was done. 2-2, my losses being Mind Twisted by Patrick and Strip Mined by Koos. All in all the deck was doing just fine!

My first opponent from Batch II was an old friend, Matt Harper. He played a sweet ‘Troll Discard’ deck.
I drew a passive hand, but it had 2 Factory, so I kept it. Matt played a quick Sedge Troll. I only had burn and that wasn’t going to work with the Factory plan. Luckily a Serra flew by, which he had no answer to. He Hymned me, forcing me to play my burn, but with the Serra, that won me the game.

Game 2 he double Hymned me and Stripped my Tundra. A Rukh token wins the game quickly. After seeing the Rukh Egg, i made another sideboard change.

My opening on game 3 was Factory, Mox Ruby->Sol Ring, Mox Sapphire->Dib. This forces him to play his Tutor turn 1 to find his Psi Blast. Factory, Dib and his own Psi Blast bring him down to 13. My Factory eats some more of his lifetotal and I Bolt his own Factory. He then Hymns me, causing me to lose Balance. I topdeck a Dib, but he Orbs it. I Plow his Rukg Egg and we’re both in topdeckmode. But I still have the Factory and that brought me the match. 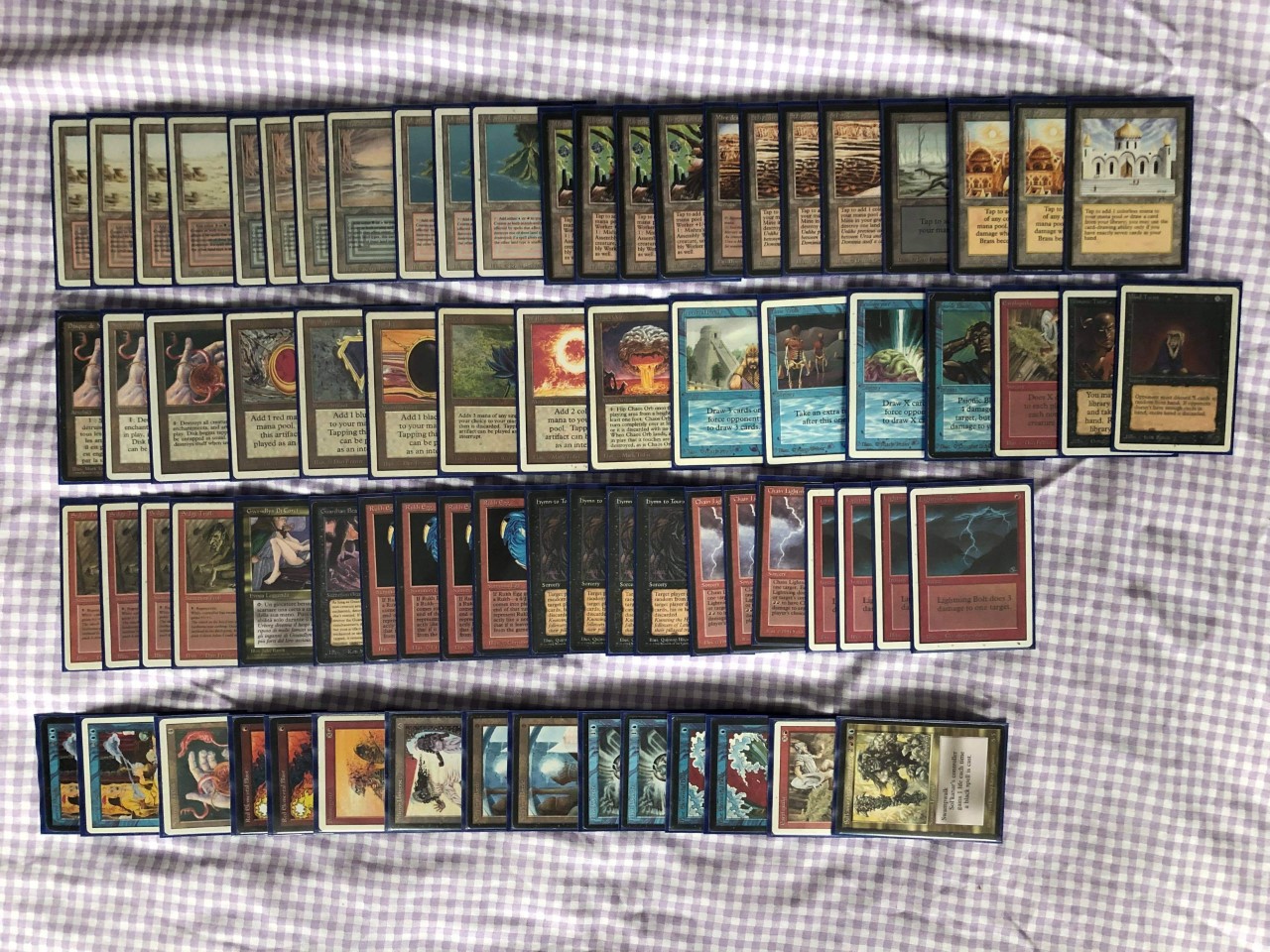 My sixth opponent was Julien Raeis, a Frenchman who lives in Italy. He played Robots.
The first game was just like the first game against Rich, I bring him to a low lifetotal and Icy takes over.

Game 2 I had to mulligan to 5, keeping a hand of 3 land, a Lions and a Disk. Julien had mana issues, so the Lions brought him below 10 life, but then came 2 Trikes, which made me use my Disk. He drew nothing anymore, so a Factory went all the way.
Game 3 Julien Mind Twisted a Disenchant, a Plow and a Divine Offering. That proved to be fatal for me, as I could not keep up with his threats anymore. I did manage to stay in the game with a Serra, but he already had me down to 2 life. Before Serra could kill him, he topdecked a Trike for the win. 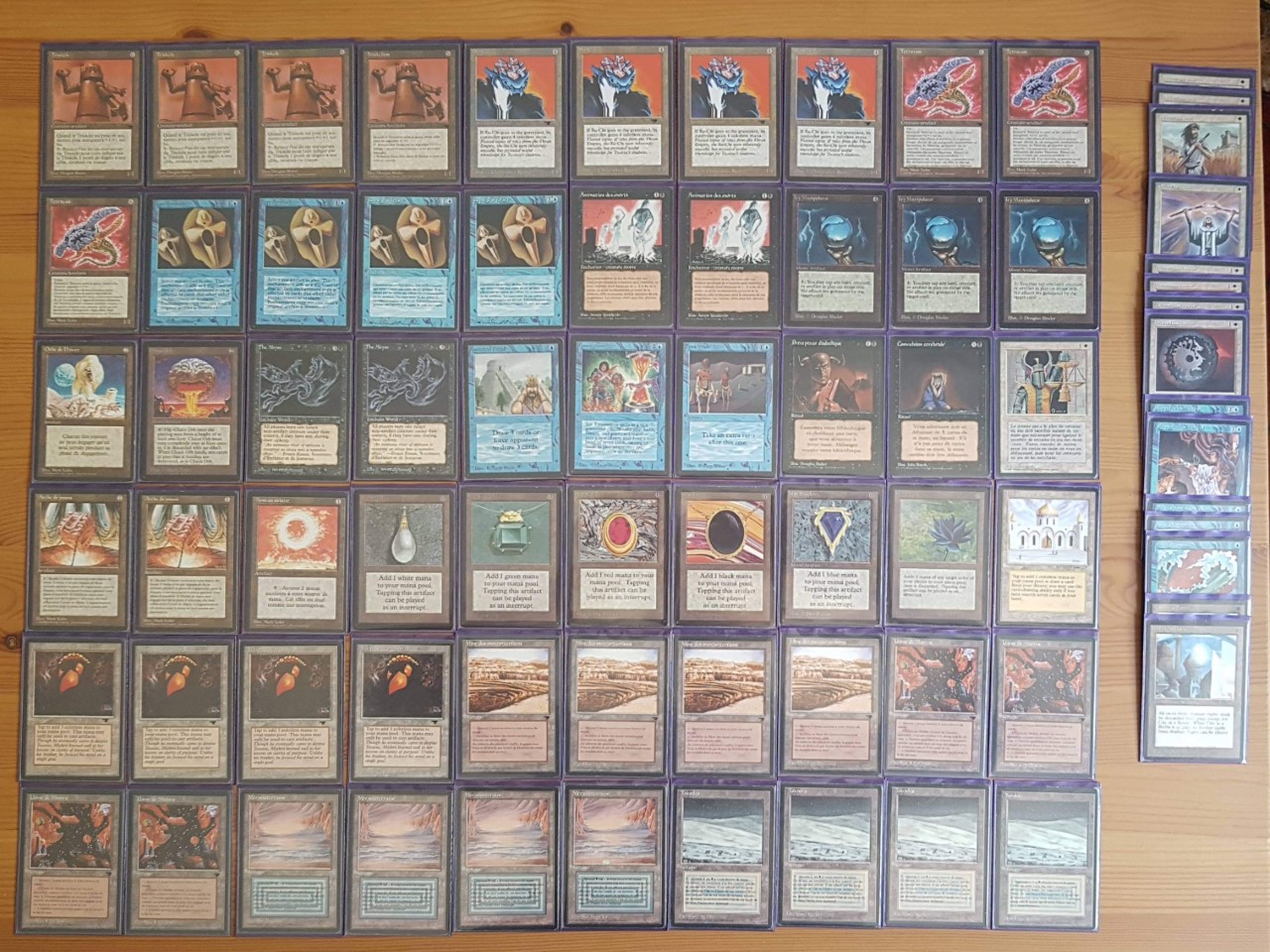 My third opponent this Batch was Ben Katz. Ben and I played in the Summerderby last year, so it was nice to meet him again. He played Dreams combo this time.
He started with Strip Mine into Vise and then Stripping away my land, followed by another Strip on my second land. I had a Factory to start beating him. He played a Timetwister and that gave me land. It gave him 2 Dreams and a Wheel. And I was on 14. In response I burn him down to 2, with a Plateau open. But the Wheel didn’t give me a Bolt, so it was his game. I thought he was on a build with The Abyss, so I boarded like this.

Our second game, I opened Factory, Mox Pearl, Lions, Mox Sapphire, Sol Ring. Way out of Vise range and 2 beaters! He starts with Mox Jet, Strip Mine, Black Lotus, Sengir Vampire. A risky play. And I have the Plow, so my creatures start attacking. I Bolt his face a few times, Disenchant a Dreams and then a Psi Blast finished it all. The Sengir made me realize that he wasn’t playing The Abyss.

His opening is land, Vise, go. I start with Plateau, Mox Sapphire, Lions. He plays a second Vise, so we’re bothing taking early damage. I draw and play Factory and Bolt him, after atticking with the Lions. My Lions is Disintegrated, but the Factory keeps on attacking. Is Disechant Dreams again, Luckily I did, because he had Wheel. I play my last Bolt and we draw 7, 2 of which were Psi Blasts for me. I’m at 10 and he’s on 5. He Sinkholes the Factory and plays Timetwister. In response I Psi Blast him to 1. I didn’t draw any burn or threat, but his hand wasn’t good either. In a desperate attempt to get back in the game he plays Regrowth on his Timetwister and that gave me the burn I needed.

I started this Derby with a fellow countryman. And my last match was against another Dutchy, Steven Deckers. Steven and I tested our decks against eachother prior tot he Derby and he obliterated me that evening with a whopping 7-1 with his Deadguy Ale deck. We were both on 4-3 when our match started, so one of us would end up with a positive record.
Game 1, my turn 2 Dib seemed very strong, but Steven had a Ritual for his Sengir. The topdeckgods were on my side and gave me a Psi Blast, so the Dib starts taking lifepoints. Steven Hymned me and I lose a Serra and a land. I Disenchanted his Disk, but I have no answer for his Balance. This loses me Dib, Lions and an Order. He’s already down to 4. He has to use his City of Brass, so he’s in Boltrange. I decided to play ‘no guts, no glory’ and played a Wheel of fortune. That gave me my Bolt.

I had to mulligan to 5, giving me 2 Strip, 2 Bolt, a City, an Order and a Plow. The latter 2 I put on the bottom. He starts, Swamp, go. I draw a Mox Sapphire, play it and Strip his Swamp. He plays Factory, Sol Ring. I draw Dib, so I play City and pass turn. He plays a Swamp and passes. I play my second Strip and cast Dib. He doesn’t draw a land and passes again. I draw a Psi Blast and my Dib starts attacking. With a Ritual he casts Sengir, but I Psi Blast it (again). I draw a Factory and soon the beating for 5 per turn starts. He doesn’t draw land and can’t afford to lose his Factory to my removal. Way too late he draws a City of Brass, giving him white for his Plow. But I already drew another Dib and that got there.

So that was my Summerderby. 5-3 in matches, 12-9 in games. The deck performed very well and I had a lot of fun meeting old friends and making new ones along the way!