The Raging Dwarf Series, what’s that? Well it’s a new series of tournaments which is inspired by Erwin Demmer’s yearly Dwarven Warrior tournament. Erwin has organised an awesome yearly gathering of wizards at his home and invented a format which is called AB4000. The rules are pretty simple, Alpha/Beta cards only and everything else is similar to the Swedish format.

Some see this as an even more “elitist” format which is of course partly true. On the other hand the format is for a lot of people going back to what Swedish was when they just started playing Old School, a “play with what you got” format. My first Dwarven Warriors I had to buy my last 2 Beta swamps just prior to the tournament, playing all the Beta black cards I owned so that I had exactly 60 cards. Since then the Beta fever got me and I’ve upgraded many cards to black bordered versions. I can go into details about what’s good and bad about the format. How the meta looks like and what the best deck is to play. However most of this isn’t really important as any format is as good as the players who play it. And I can say that we have a really fine bunch of players in the Netherlands, Belgium and abroad who love everything about this format.

So then what is the Raging Dwarf Series? Well, it’s the online version of the Dwarven Warriors tournament. I wanted it to be played out during 1 evening so it could fit in during a weekday and therefor I opted for a 16 players max, 4 rounds Swiss tournament. While I can say we will definitely do this again the setup might change slightly or remain the same, I’m not sure yet. We were lucky that Timmy wanted to stream it all live again on YouTube. Doing commentary for 4 hours straight isn’t as easy at it sounds, so many thanks for doing this! If you want to watch the livestream you can check click here.

After 4 rounds we saw a fully powered CounterBurn vs an unpowered DeadGuy Ale deck taking it at eachother in the finals. Since I was playing myself I didn’t see the first 2 games but in the 3rd game Evert took it down after Simon played an early Serra Angel which got Control Magiced and did most of the work. Anne finished 7th which we agreed upfront would be the sweet spot to finish at during this tournament! Thanks everybody for playing and watching the livestream, below all the pairings, results and deckpics. Hope to see you all soon. 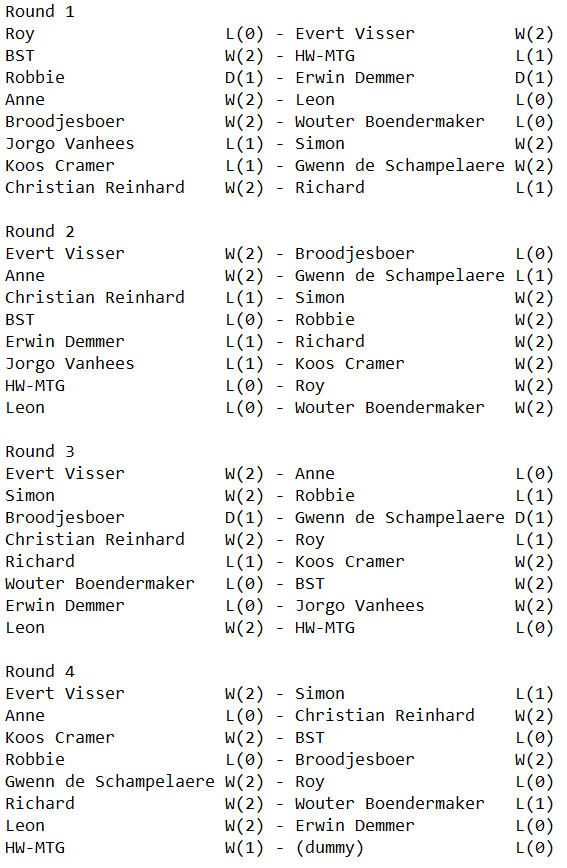 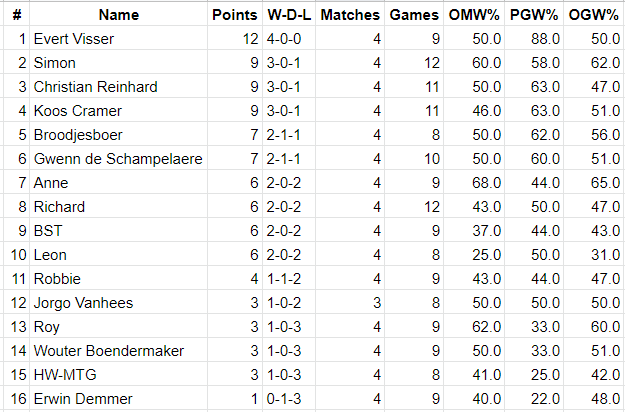