Since I didn’t play the Raging Bull Series myself I was very much looking forward to the next tournament. Gathering of The Knights of Thorn VI  was the obvious choice but I couldn’t make it, luckily I also received an invite for the Dwarven Warriors Cup II which was held in the same weekend. With Erwin Demmer as host, playing in his backyard, you know this is going to be a little different than usual. If I can summarize it I would call it: A day of kitchentable Magic with somebody writing down results but nobody that really cared.

Let’s first get back to the moment I got the invite. Dwarven Warriors is not a regular tournament with Swedish rules like most others in the Netherlands, it’s Alpha/Beta only. The B&R list and rules are the same as Swedish, you just have a lot less cards to choose from and your cards have to be black bordered. While I love black bordered cards, I don’t own that many. I own 9 Beta duals, they are all a combination with white but I only own 14 white Beta cards. I own a bunch of green Beta cards (28) but none of the creatures are bigger then 1/1 and most don’t really fit the format (Ice Storm, Ley Druid) or are better for the sideboard (Tranquillity/Lifeforce).

The best option seemed to play black with a red splash since a Lightning Bolt or Fireball is a lot better than Terror. Weeks before the tournament the Beta flew started, I started looking on MCM for Beta cards, any Beta cards, every day…. What if I buy some Icy’s and Royal Assassins? Wouldn’t Demonic Hordes be super spicy? Should I buy some Green creatures and play mono Green? Luckily I have somebody who kept me in check and the only cards I bought were cards I wanted black bordered anyway, 3 Black Knights and 1 Terror. So I settled on Black/Red until I counted the total numbers of Black cards and figured out I could also play mono Black. Is there anything more beautiful in black bordered then mono Black? I don’t think so! So I shuffled all my black Beta cards into 1 big pile, only keeping 4 Glooms for the sideboard. 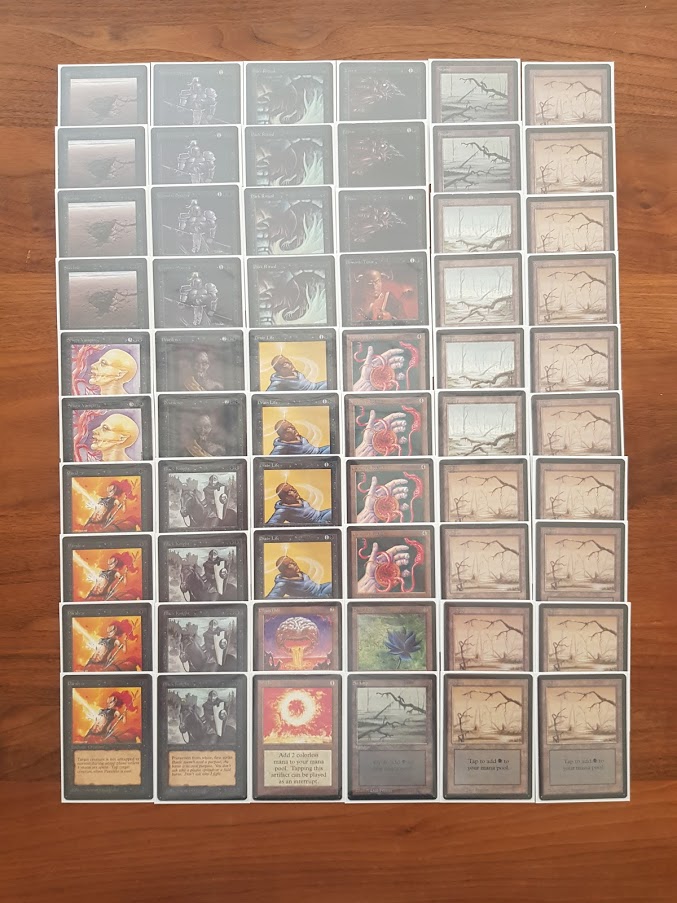 I first picked up Evert and Jeff, great for some small chat during the drive and both made T8 of the Knights of Thorn the day before so they had plenty to tell. It was clear that half the people would play mono Black, damn, my 4 card sideboard isn’t going to make the difference today. When we arrived in Voorthuizen some people were eating breakfast since they had a sleepover at Erwin’s place and some already started drinking beer, some did both. I refused the 1st beer around 11:00 since I was driving, I grabbed one 5 minutes later because why not?

Most people were still scrambling cards. Luckily with Wijnand and Robbie in the house this is pretty easy. Jeff bought some cards so he could move his Evil Presence to the sideboard, a very wise choice knowing most of your opponent’s play mono black. Nick bought a Channel for his newfound combo, he won only 1 game without playing his new channel. I had to buy a Beta Swamp to complete my deck, super powerful and not to be underestimated.

First round I play Jeff, sweet after picking him up I’m sure he returns the favor by letting me win. Game 1 my deck feels super strong, I make all the right plays and already know this is going to be my day! Game 2 Jeff tables a Bog Wraith, yes that’s a 3/3 Swampwalker…. Game 3 the Bog Wraith does it again. Jeff needs to find a new ride home and I lose the first round.

Round number 2 I play Roy. Roy is the best mono Black player in The Netherlands so I’m fairly certain he plays mono Black. Somehow he tables a Mountain and a Two-Headed Giant of Foriys. This 4/4 creature cannot just block 1 creature, it blocks 2! This sweet tech was still not enough for Roy to win the first game. My deck feels super strong, I make all the right plays and know that while I lost the first round, this is going to be my day! From here on I’m not sure anymore since I’m better at remembering spotless victories then I am at remembering losses but I get butchered in game 2 and 3 and in the last game it’s a Demonic Hordes that gets the best of me! Oh well, at least it was a pretty death.

I’m at 0-2 and need something to turn it around. I look around and I see chips, cookies, frikandellen and beer, lots of beer! Since I’m driving I only allowed myself 2 beers for the day so I have to make it count. Erwin offers me a Dwarven Warrior beer, aka Westvleteren, this perfectly suits my game plan! I poor the DW beer in a nice glass and get prepared for round 3. 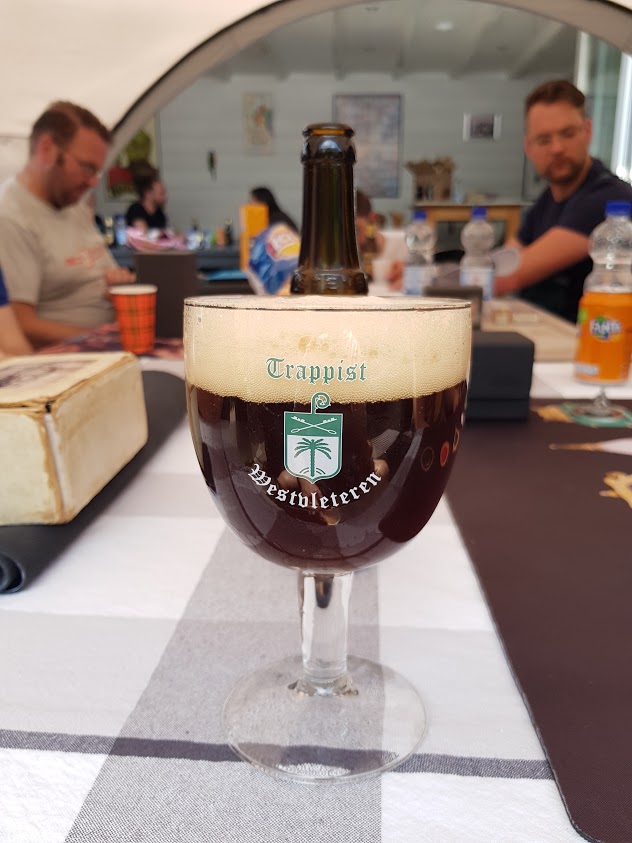 I play Nick and Nick always plays the deck so he’s for sure on something with White. Finally my Gloom’s can shine and I feel pumped! Nick tables a forest and a Llanowar Elves, Bolts Hippies and Disintegrates Sengir Vampires. I mention to Nick that we both are going to play the Fishliver special tournament in Barcelona, Nick doesn’t care, Nick keeps going, Nick wins the first game. I don’t feel that strong anymore, I’m sure I screwed up a couple of times but know this is my day anyway! The 2nd game I get obliterated, happens. After that we play 9 more games just because we can. We go 2-8-1 with the draw being my best game of the day. After wasting every creature that hit the board on both sides we both end up at 9. Since the game already took forever and I play Rituals I manage to cast a Pestilence and whack us both for 9 damage. If I wouldn’t have done that, Nick would have won! Sure he still won most games but who’s counting anyway?

Round 4 I’m able to play Tom. Tom is the guy who ordered 4 Beta Stasis months ago but never received them. Tom doesn’t like to give up, so bought 4 new ones just to make a point! Blue/Red Stasis it is and we all know what a monster Stasis is in Alpha/Beta only. After tabling Stasis in game 1, I had to wait 6 turns before he couldn’t pay his upkeep anymore, 6 turns! Needless to say he was death 1 turn later. The 2nd game unfortunately wasn’t any better for Tom so we played a third game just so he could get his victory in. To be sure, I still reported 2-0!

Jeff makes the Top 8 and pays me an additional € 100 to drive him home. Since I still needed some cards I accept his offer and play some casual games against Anne. Anne plays TwiddleVault and his 3 piece combo works fantastic! Apparently it didn’t during the rounds before but it worked pretty well against me 🙂 Hanging around in Erwin’s backyard is no punishment at all and after a nice chat with Wijnand and a couple of more beers for Evert and Jeff we drive home. My bag is extra heavy due to 2 pretty deckboxes and a couple of new (white bordered) cards. This tournament was truly a blast, damn I love Old School and its community. I knew this was going to be my day and I was right all day long! 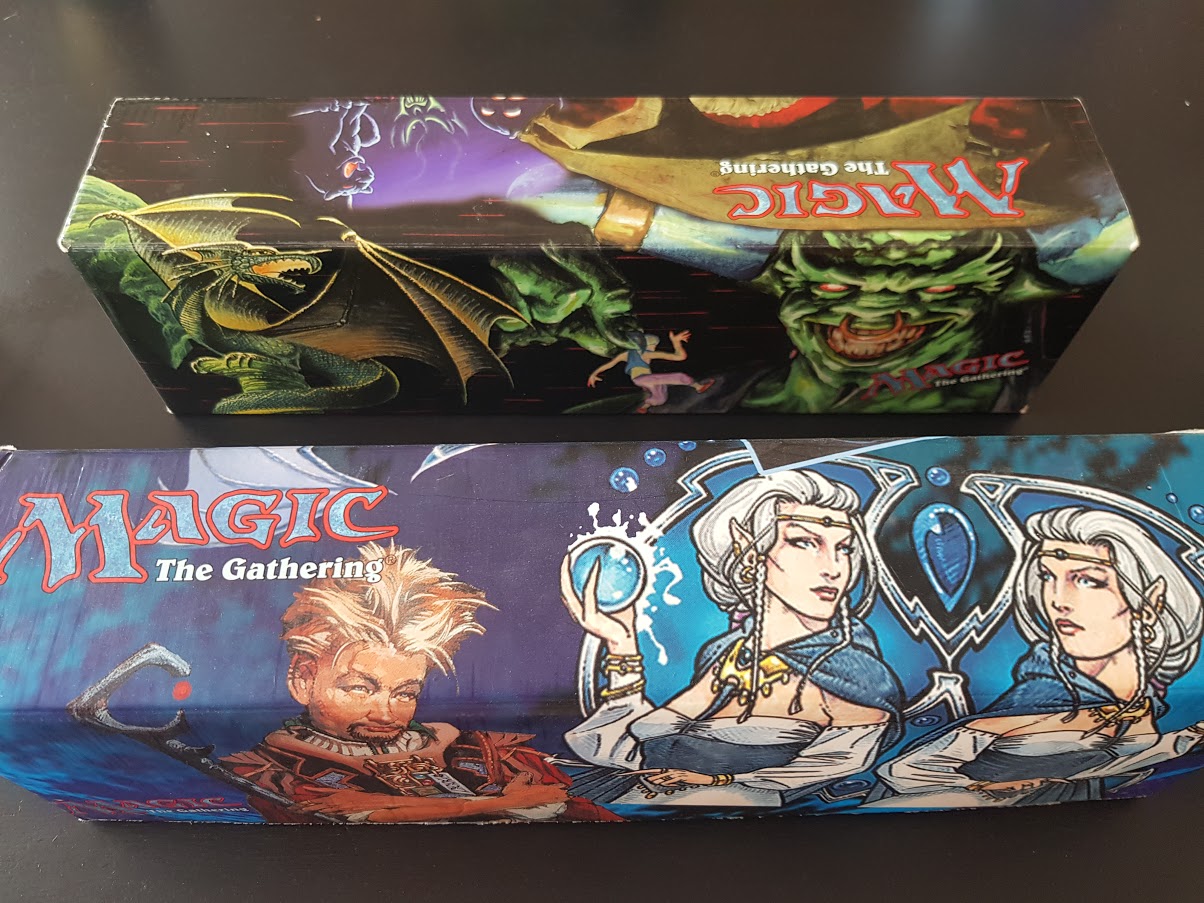